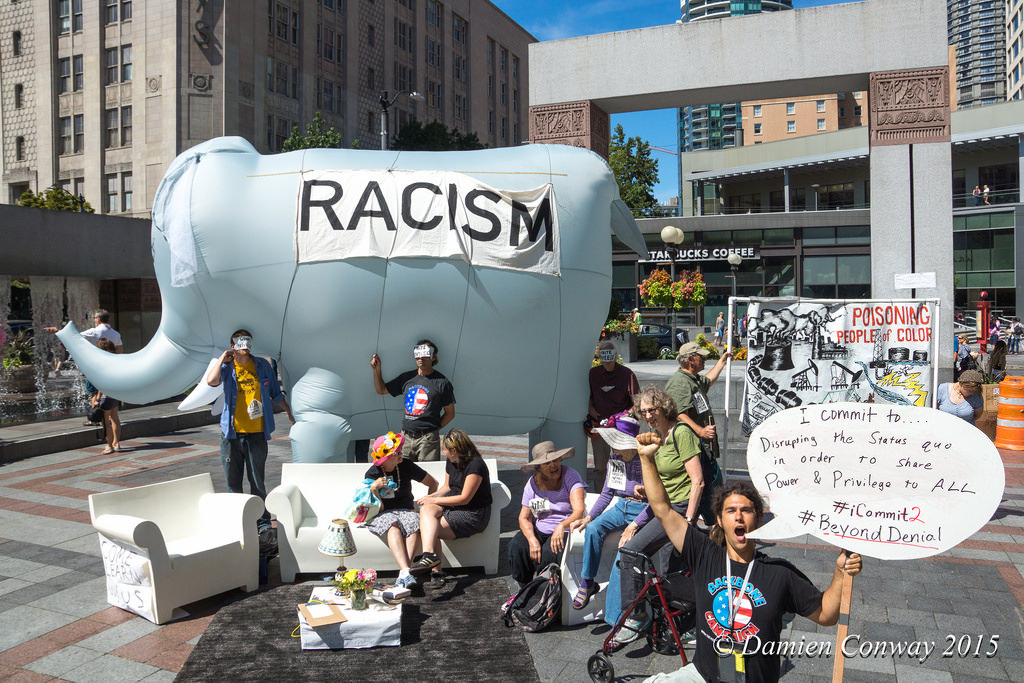 We are immensely proud of the deep work done at this year's Localize This! Action Camp. The result was a tourable action, launched at the very spot where only a week before activists who identified with #BlackLivesMatter confronted Sen. Bernie Sanders and his supporters. People of color are asking, inviting, and demanding that white progressives move beyond defensiveness and denial. It is time for us to instead listen deeply and confront the disease of racism that infects all of us and seeps into the structures of our society. It is time to work with others to acknowledge our privilege and spend it to dismantle systems of oppression.

Pitch in today to propel this racial justice work forward and enable us to bring the #BeyondDenial action to more communities. 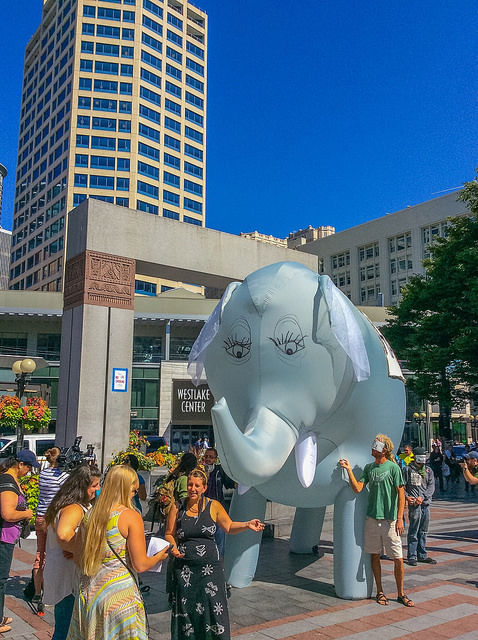 Bring the Elephant In the Room Beyond Denial Art Installation to your community by clicking HERE!

At this year's Localize This! Action Camp participants stepped forward into their discomfort and grappled with how we as we as progressives, many of us privileged in multiple ways can act as allies to communities of color. Participants at camp yearn to manifest our shared aspirations for racial justice and collective liberation. We listened to the requests of people of color - that we work with white people to educate them about systemic racism and commit to dismantling structural racism and white supremacy.

You may want to watch the panel that informed this action, "Women of Color Speak Out," presented both at camp HERE and at their TownHall event HERE. Moreover, we sought the leadership and guidance of people of color in formulating the final action. Localize This! participants went beyond their week-long training and discussions around anti-oppression work to then take these difficult conversations into the streets and creatively and authentically engage with the public.

The result was an action that integrated a large eye-catching spectacle, a memorial for victims of police brutality, an art installation, storytelling, and dialogue. Further, the public was invited to publicly commit to deepen their efforts towards racial justice. Continue below to see what this multifaceted action looked like.

See the bottom of the page for a brief summary of a lesson that we've learned that at least in part spurred the creation of this action and resources.

On August 17th in downtown Seattle passersby were invited to take part in a public interactive art installation to expose racism as the “elephant in the room.”

Elephant in the Room

During the bustling lunch hour in downtown Seattle, masses of the public were surprised to find a 12 foot inflatable elephant in the room. Many people wearing white privilege blindfolds (literally) were unaware of and not addressing the epidemic of racism (the elephant in the room).

We invited passersby to watch a Cantastoria. We told racism DESTORYS (play on words intended) using murals depicting how racism seeps into the structures of our society manifesting as police brutality, the poisoning of communities of people of color, and the school to prison pipeline.

Then, the public was invited to continue conversations on white privilege, racism and allyship in the living room we set up in the park. The comments made by people of color who stopped by affirmed and validated the need for this type of work and their appreciation that camp participants were organizing it. They hoped that other communities would do the same.

Before the public left we encouraged them to get their picture taken holding an oversize speech bubble where they wrote one public commitment towards racial justice work they would make. Some of the commitments people made were:

We distributed 500 copies of a flier detailing commitments people can make to work towards racial justice and ways they can identify their privilege not afforded to many people of color. In addition to two television stations showing up, the social media efforts garnered 271 tweets using #BeyondDenial and earned 476 retweets from the hashtag #ICommit2 reaching 566,758 people and has been seen 2,206,291 times (# of impressions) .

Memorial For Those Killed By Police

The public who didn't engage with the installation walked a sidewalk lined on both sides with a memorial to the 1,200+ people who have been killed by police since the murder of Mike Brown. While we hope no more names will be added to that list, we hope that other communities will add to the memorial so it honestly reflects the staggering numbers who have fallen victim to police brutality. Each of the current ~200 placards have an black and white stenciled outline of a victim and heart in the middle with the persons name written on it.

The discomfort many of us felt in these conversations, and the stress of confronting racism as white activists, seems trivial in comparison to the hardship and systemic violence experienced first hand by so many people of color. White progressives have a responsibility to at least educate ourselves and learn how to ACT as better allies. Allyship is not a merit badge or a title, it's an ongoing struggle to act in solidarity with marginalized groups of people. Only together can we dismantle racism and oppression and strive for collective liberation.

Help us bring these conversations and commitments towards racial justice to communities beyond Seattle. DONATE HERE

Backbone is grateful for the continued support for our Localize This! Action Camp and Artful Activism with funding made possible by:

Please share the following conversation starter with your friends and family:

What the #BlackLivesMatter movement has accomplished in the year since Mike Brown's murder is nothing short of impressive. If you needed proof just look at the fact that in Ferguson, MO sweeping changes to the city's court systems were announced including the withdrawal of all arrest warrants before December 31st 2014, citing the epidemic of racism throughout the (in)justice system.

Many progressives are inspired by the work of people of color, but don't know how engage authentically as an ally. What is worse, many uncomfortable with the type of tone or tactics of some actions become defensive or distance themselves in a manner that inflames divisions and hurts the movements for collective liberation. Dismantling the deeply embedded systems of oppression is inherently agitational and necessitates the strategic escalation of conflict. The tone and tactics of people of color will likely look different than those employed by people who have been shielded from the violence of racism by their privilege. People of color deserve to be honored and respected to organize actions as they see fit that are authentic to and represent the shared lived experiences of their communities. Otherwise, progressives risk doing the work of the oppressors for them. Progressives risk reenacting the divide and conquer tactics that plague our movements for justice. Progressives should not police the organizing of people of color for what they perceive as respectability, especially when the war on their communities, fueled by racism, looks like 1,200+ people killed by police since Mike Brown's murder. The action at the conclusion of Localize This! Action Camp sought to highlight and model what active allyship could look like. We sought to both educate and drive people to commit to take action practicing true allyship. Will YOU do the same?

A great article on the action by our friends at Popular Resistance: https://www.popularresistance.org/seattle-protest-stop-denying-white-privilege/