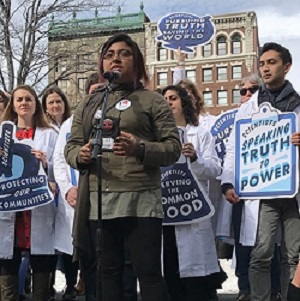 Yvette Arellano is Research and Policy Liaison with t.e.j.a.s. in Houston, Texas.

Yvette believes that political participation is vital to her work at T.e.j.a.s and has extensive knowledge regarding EPA databases and toxics registries such as the EJ screen. In 2015 she lead the campaign against H.R 702, the exportation of crude and other products. Yvette represented the gulf south and T.e.j.a.s at the United Nations COP21 in Paris along with the Gulf South Rising Coalition. Recently, she aided in a collaborative project with Union of Concerned Scientist and T.e.j.a.s, which jointly published “Air Toxics and Health in the Houston Community of Manchester” and “Double Jeopardy in Houston: Acute and Chronic Chemical Exposures Pose Disproportionate Risks for Marginalized Communities (2016)”. Yvette’s work in environmental justice highlights that access to clean water, air, land and food is a human right. She believes that success can be best achieved through intersectionality.