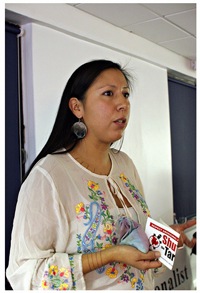 Heather Milton-Lightening. Heather Milton-Lightening has seventeen years of organizing experience from local issues to international campaigns. Heather was a founding member of Native Youth Movement-that empowered youth politically and socially to make change in their communities; based in Winnipeg, MB in 1995. She helped found Winnipeg's first Native youth organization called Aboriginal Youth with Initiative, Inc. in 1998 through her position as Associate Director. Heather then went on to found and build a national Native youth network that supported Native youth organizing across the US and Canada with the Indigenous Environmental Network based in northern Minnesota. She was a former member of the United Nations Environment Programme's Youth Advisory and has extensive experience in lobbying internationally through the United Nations and other International arenas on Indigenous Peoples issues. Heather's work since then has been to build capacity and find resources that help local Native communities. From funding board participation on the Funding Exchange Saguaro Fund and Honor the Earth; to helping build the Indigenous People's Power Project through the Ruckus Society that trains on non-violent direct action tools. Heather currently is the Co-Director for the Indigenous Tar Sands Campaign out of the Polaris Institute in Ottawa, ON.