"All I want for Christmas is a chance to live" #KeepPhilAlive

UPDATE: The actions worked, and Phil received a reversal of CareFirst's decision.  He will receive the medication his doctor has ordered. Click here to read his Jan 2, 2020 update.

“All I want for Christmas is a chance to live”
Insurance company CareFirst of Maryland is condemning a 41 year old man to death,
denying him access to the medicine his doctor requested. But he and his friends are fighting back to #KeepPhilAlive 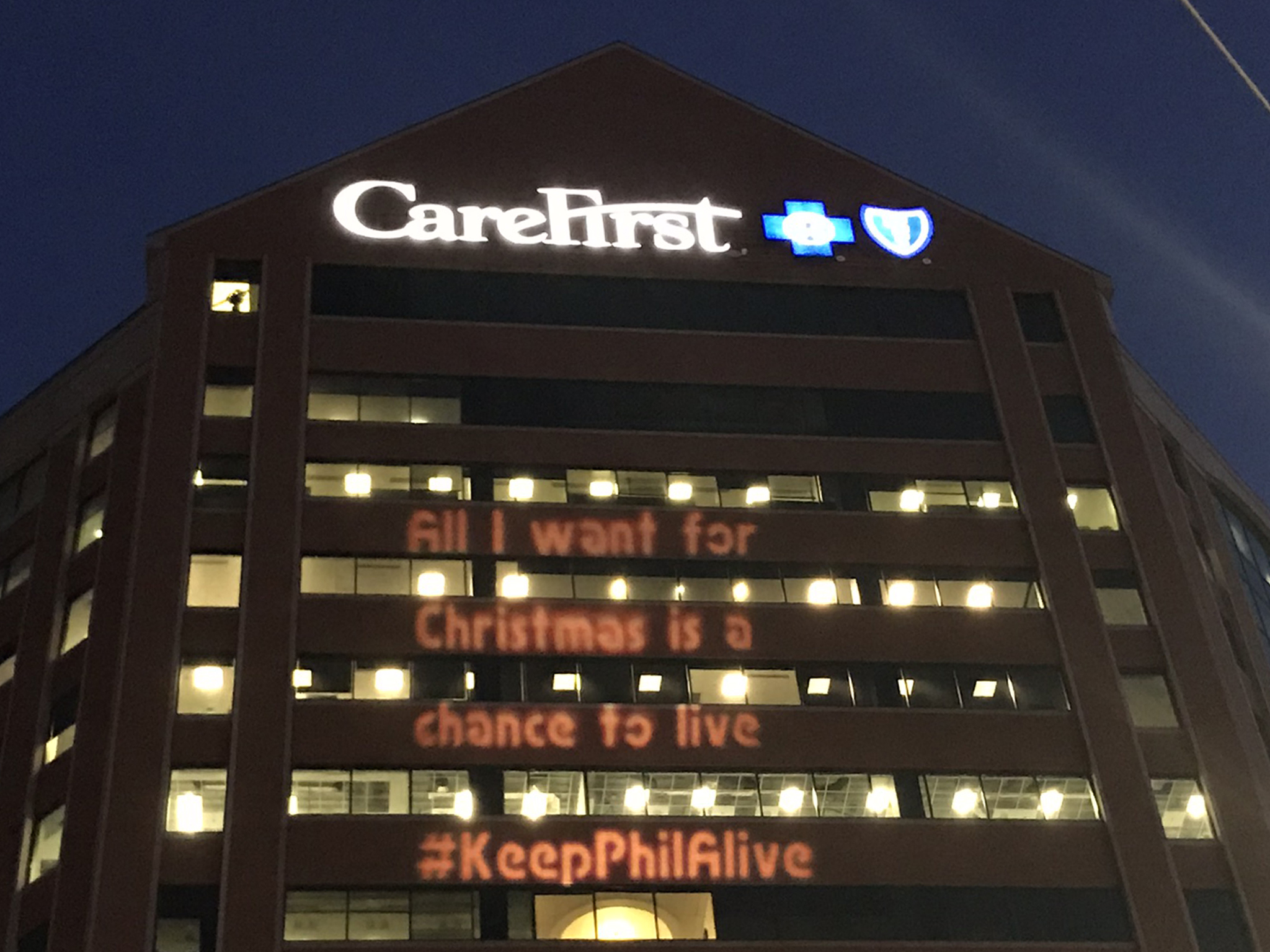 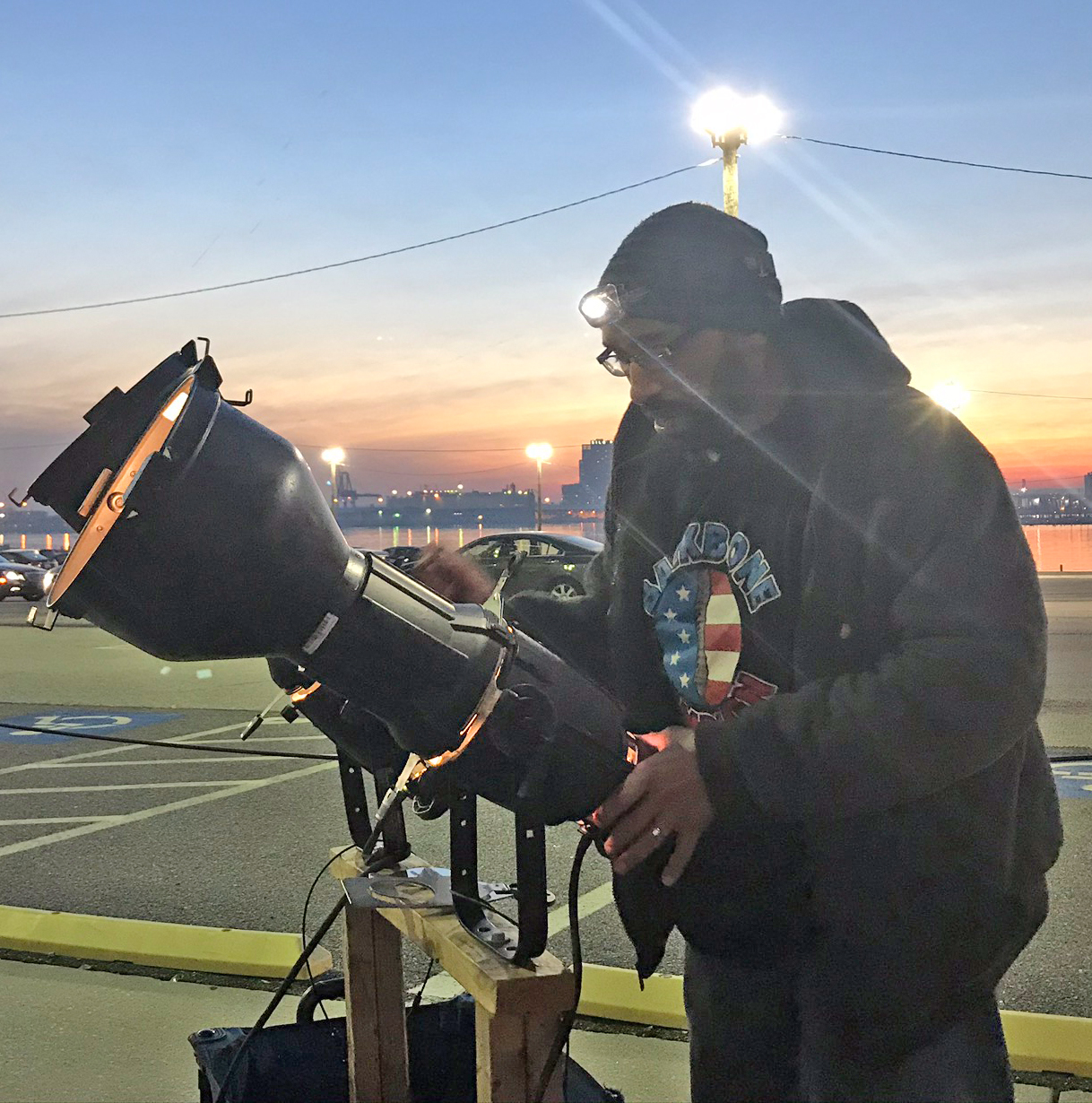 CareFirst has denied cancer patient and Annapolis resident Phil Ateto access to life saving drugs. The medical insurance company is superseding the wishes of Phil’s oncology team.  To expose that CareFirst’s choice to put profits first is condemning him to die, Phil Ateto went to their Baltimore office on Monday, December 23rd, to shine a spotlight on their greed and urge them to reverse their “death panel” decision.

Phil is a renown artful activist with a group called Backbone Campaign that uses creative means such as light projection to support progressive causes around the country. Phil has tirelessly fought for economic and environmental justice, opposed racism and endless wars that squander lives and resources, and he’s long advocated for universal human rights.

For years, Ateto has been an active member of Healthcare is a Human Right Maryland working to forbid care-denying  insurance companies and pharmaceutical corporations from profiting from people’s suffering in Maryland. Phil has also projected, marched and lobbied with the group Health Over Profit for Everyone (HOPE) advocating for a nationwide Improved Medicare for All, US single payer health care system so that no one in the US is ever again denied access to this basic human right.  Now, Phil is having to fight for his own life.

Phil Ateto, a 41 year old Annapolis resident, has been fighting multiple myeloma cancer for 9 years.   Having exhausted almost every drug available, Phil’s oncologist requested that CareFirst approve him for Venetoclax, a new drug that is FDA approved for similar blood cancers, and has shown promising results in trials for those with multiple myeloma. His oncology team believes that taking Venetoclax for 1-3 months will 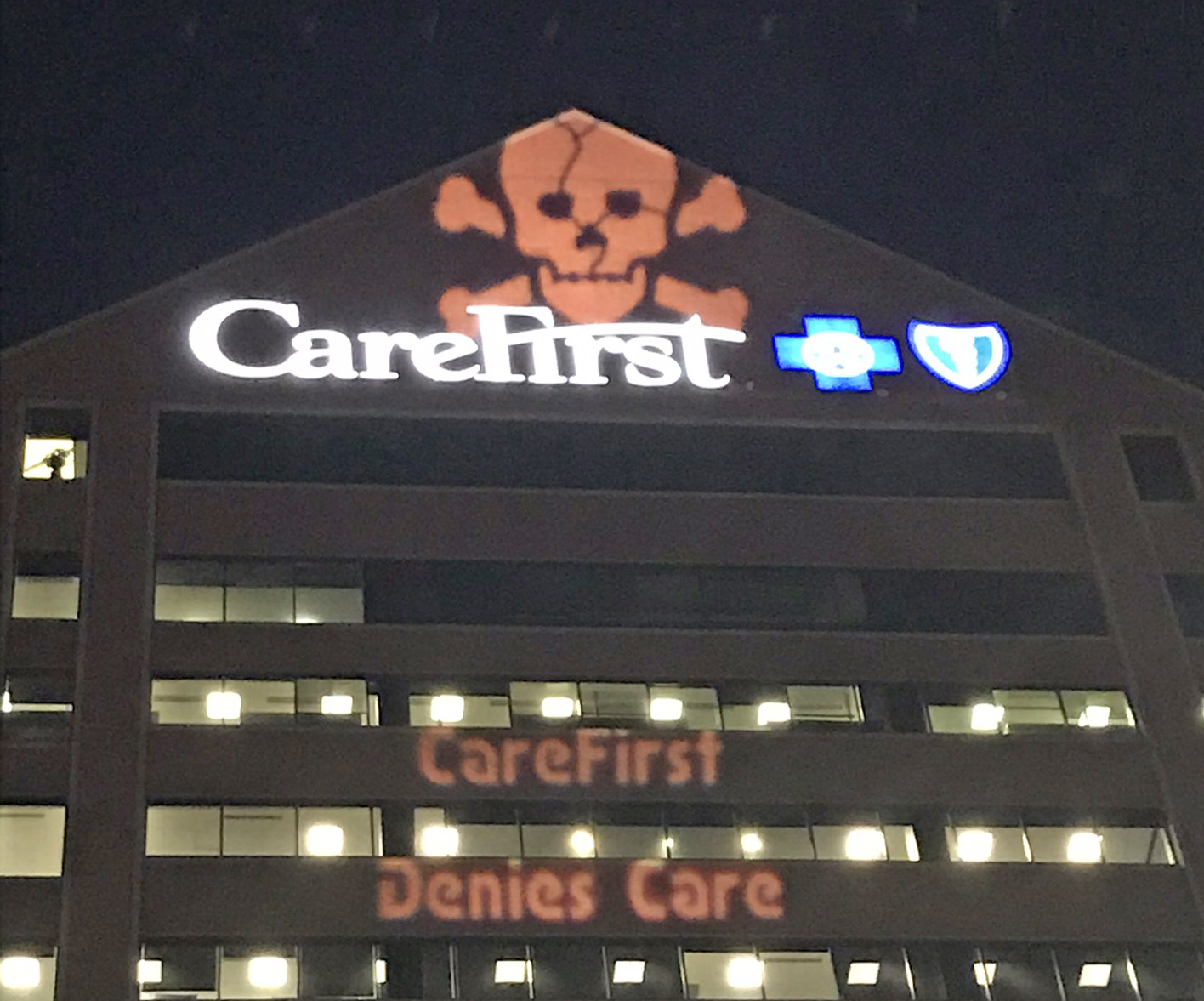 allow him to survive long enough that he can undergo a Car-T Cell Treatment in early Spring, Phil’s doctor feels that this is his best and only option for staying alive.

CareFirst is denying Phil coverage. CareFirst is refusing to honor Phil and his doctor's wishes. Phil’s cancer levels are growing everyday that he is not in treatment. CareFirst is condemning Phil to die.  But Phil is fighting back.

Last night Phil brought out a couple of the spotlights he usually uses to support other causes and projected onto the CareFirst tower in Baltimore “All I want for Christmas is a chance to live” and other messages to let the public know that “CareFirst Denies Care,” “Condemns Friends to Death” and call for “Medicare For All.”

“After all that BS we heard about ‘death panels,’ the real death panels are the insurance companies that get between patients and their doctors to  deny care and access to medication. That interference is a death sentence for those being denied,” said Ateto. “That’s what CareFirst is doing to me and I love life too much not to put up a fight.” 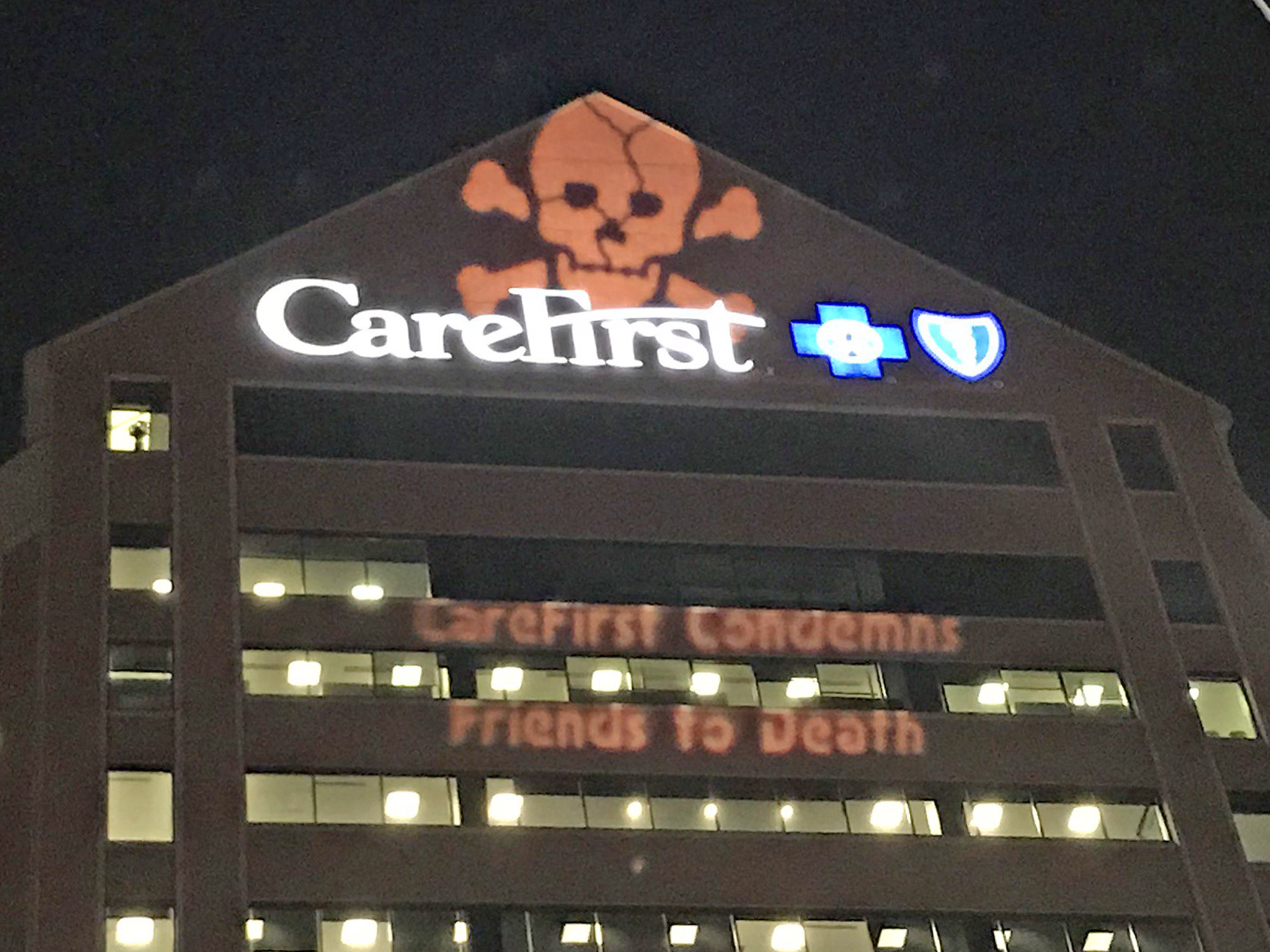 Phil’s friends are not giving up either. They set up a GoFundMe to raise funds to buy time for Phil if he can access the medication. The fund has raised over $20k so far to set up to raise emergency funds to #KeepPhilAlive. www.gofundme.com/f/keep-phil-alive-help-get-lifesaving-treatment

“I appreciate all the support I’ve gotten. But it’s pretty freakin’ messed up that anybody should have to use GoFundMe to pay for medication or get the health care they need,” said Ateto. “Few people have the tools to advocate the way I can. That’s why I need to make sure it’s clear that this is not just about me. This system totally stinks. We need to toss it into history’s dumpster for dumb ideas and start over with an Improved Medicare for All system like the civilized world. But right this minute,” Phil said, “I need to fight to stay alive so I can help make that happen. CareFirst needs to get the heck out of the way and let me and my doctor figure it out.” 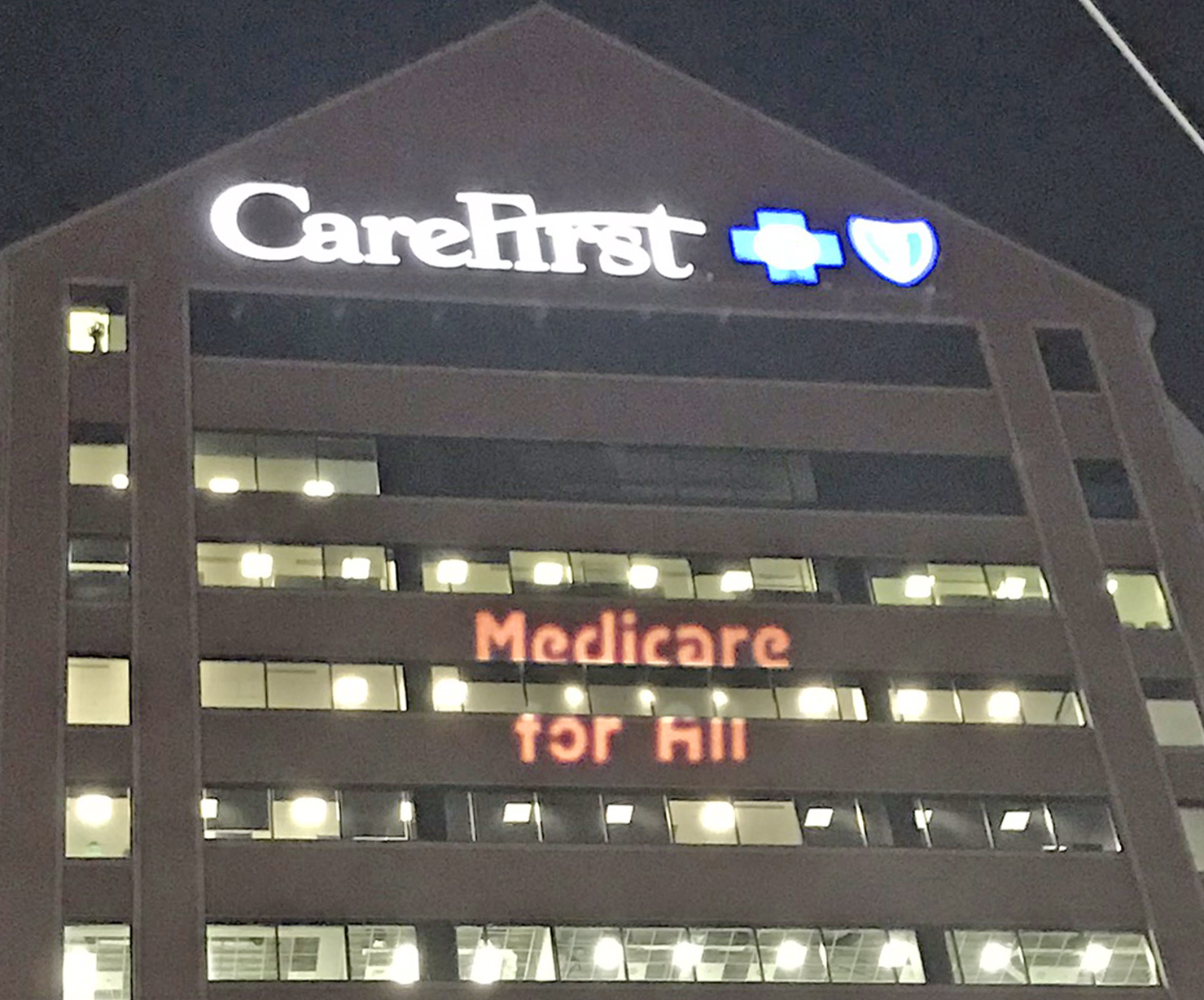 Phil knows that his situation is shared by people all across the US, whose insurance companies are interfering in the sacred relationship between doctor and patient.  No corporation should be able to do that, but in the US denial of care is how insurance companies make their money. Phil has fought for years for the people of Maryland and the people of the US to have unfettered access to healthcare because he believes it is a basic human right. Insurance corporations are the real “death panels.” So-called “CareFirst” is condemning Phil to die, but he isn’t going down without a fight. The Insurance industry just messed with the wrong guy.

Psst, CareFirst - Phil and his friends have just begun.

Access some of our favorite photos HERE. Access many more from Phil's action HERE: Feel free to use with the following attribution, "Photo courtesy of Phil Ateto. 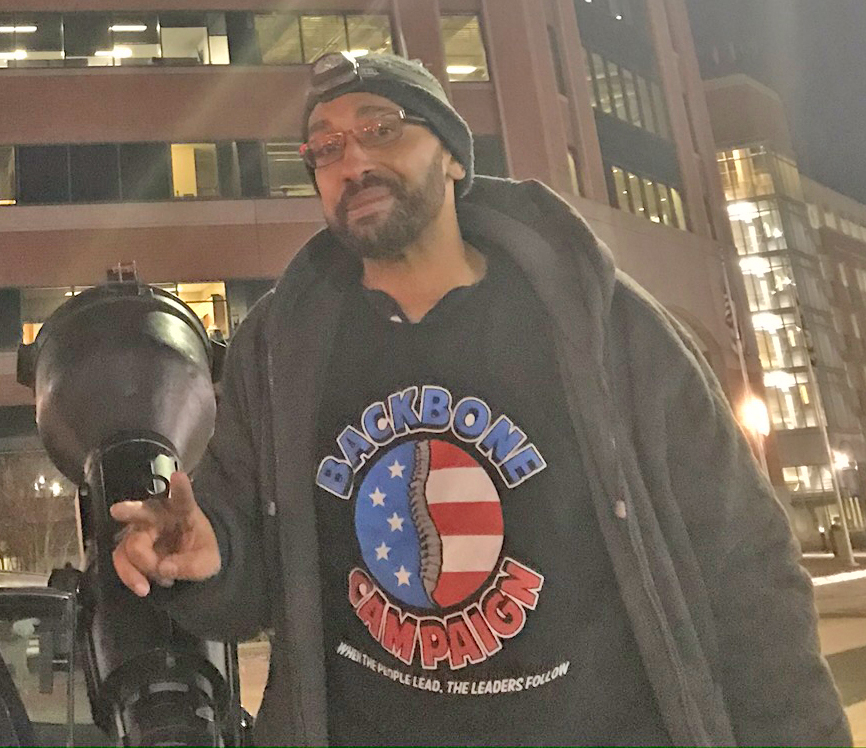