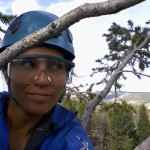 Ruddy Turnstone is a GE trees campaigner for Global Justice Ecology Project, working to ban genetically engineered trees from commercialization globally. When she is not fighting mutant trees she loves tree climbing. Ruddy provides direct action climb trainings for the Earth First! Climbers Guild, Greenpeace, the Backbone Campaign and at Trans and Women’s Action Camps, and tree climbing to the public as recreation.

Ruddy has also been an Everglades Earth First! (EEF!) community organizer since 2007. Through EEF! She provides direct action trainings for and is organizing with Seminole Tribal Members and Independent Traditional Seminole Nation supporting their efforts to fight one of the largest fossil fuel power plants in the country, which is slated to be built right next to the Seminole Tribe’s Big Cypress Reservation in south Florida. Since 2010 through EEF! and the Palm Beach County Environmental Coalition she has also been working to stop a 682 acre forest from turning into a biotech city in South Florida. She is also on the Campaign to Stop GE Trees steering committee.