#ActOnClimate #RenewablesNow The Vashon community showed up in a big way with short notice to rise up against PSE's LNG greenwashing.

PSE opted to close their doors hours early rather than hear the voices of their ratepayers. 1,300 Vashon residents signed onto a petition to PSE demanding an end to their investments in fossil fuels.

Carbon-based power is a deadly threat. We demand PSE tp remove their investments in Coalstrip and to join the voices advocating for its closure by 2025. We demand they replace all coal power in their grid with renewable energy sources, energy storage systems and conservation. PSE needs to abandon the dying carbon based power industry and move aggressively to non-carbon solutions. We demand PSE recognize our right to not pay for our own destruction. 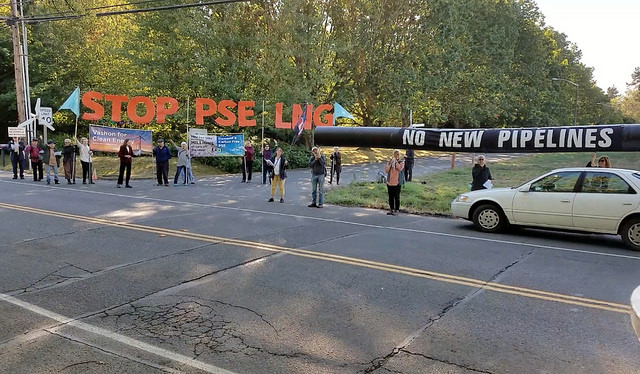 We advocate for Vashon residents to reject PSE's LNG greenwashing. As ratepayers, we urge Vashon residents not to sign-up to convert to "natural" gas and instead join the call for 100% renewably-powered energy.

We are against the building of an LNG storage facility and any new fossil fuel infrastructure.

LNG is a bridge to nowhere. We don't appreciate PSE's brazen fetish with LNG which senselessly ignores the devastating climate and environmental impacts associated with its extraction, transport and burning. If they cared about the wellbeing of their customers, PSE wouldn't be making ratepayers foot the bill for such a reckless proposal that only deepens our dependency on dirty and dangerous fossil fuels.

Background on the issue:
Puget Sound Energy (PSE), an Australian-owned utility, claims to be a leader in green energy--but 60% of PSE’s supply comes from coal and “natural” gas, most of it fracked.

Gas has been called a “bridge” fuel in the transition to renewables, but methane released during extraction and transport means it’s as bad for the climate as coal, because methane has 80 times the warming potential of carbon dioxide in the short term.

PSE is building a Liquefied Natural Gas (LNG) facility at the Port of Tacoma. The Puyallup tribe is strongly opposed to this LNG project, which is being built on their traditional territory and adjacent to their reservation--putting their communities, waters, and treaty fishing rights at grave risk.

PSE is also planning to convert its Colstrip coal power plant in Montana (the dirtiest in the US) to gas--thus locking the company in, economically, to decades of fossil fuel use...right when we need to move aggressively to clean, renewable energy.

STAND WITH PUYALLUP! SAY NO TO LNG! YES TO 100% RENEWABLE ENERGY NOW!

For more photos, videos, and interviews -  check out the Flickr album HERE