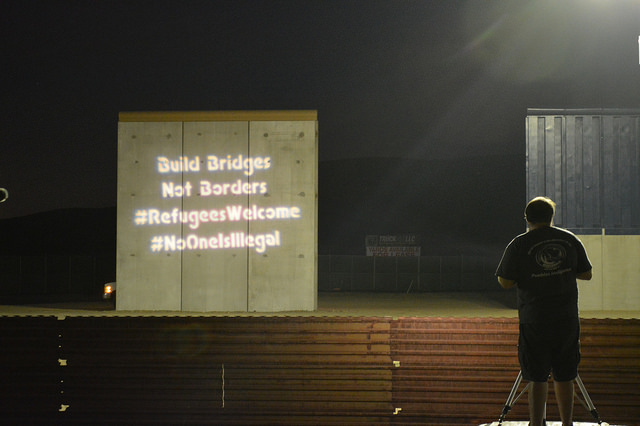 Their message was clear - "Build Bridges Not Borders," "Refugees Are Welcome," "No One is Illegal," countering the racist and xenophobic policies and rhetoric of the "Embarrassment-In-Chief" and the party of Trump.

On 11/19/2017, under a new moon, accompanied by a gorgeous sunset, a binational group of activists/artist met up at Las Torres barrio, Tijuana, Baja California. Setting up atop 3 vehicles parked against the existing border fence, facing the newly constructed prototypes, our group began projecting light graffiti onto the 30 ft by 30 ft border wall prototypes, located 100 to 150 feet away, on heavily guarded, impossible-to-access, U.S. soil. By using our" Las Torres shortcut", we had perfect access to all the prototypes.

Overpass Light Brigade San Diego aimed our 750 watt Source Four stage lamp, equipped with a long-distance lens, at several prototypes, and began projecting. Jill Holslin, Andrew Sturm, and a Mexican videographer recorded the entire event. 5 images were displayed, beginning with a luchador, well known as a fighter against injustice in Mexico. A ladder ascending the prototype was next. In a playful spirit, the 3rd image of a stick figure climbed the wall with the words "LLEGALE" (go for it) below it.

Lady Liberty then shown her light. The concluding image was an invocation that we as humans honor our common humanity more than contrived borders, and welcome refugees.

The entire event was an example of how borders can bring people together, as UCSD students, faculty, Mexican nationals and US activists all met and created the event in response to the erection of fascist architecture on OUR BORDER. San Diego is and ever shall be, a border town. We are her citizens, and we shall defend her.

For more photos check out the Flickr album HERE