Why Backbone? A personal perspective from co-founder and E.D. Bill Moyer

"For me, the metaphor of Backbone means more than personal courage for principled action. It is more than the natural connection between causes unified by a common underlying values. It is also an instructive metaphor for Power. One way to define Power is the capacity to manifest. I now utilize Backbone and my story of being on the ground unable to get up as an analogy for aspirations without the power to realize them, or move them."

As far back as I can remember, I always loved climbing trees. I sat in one on May 29, 1992, feeling inspired by nature's beauty and our part in it, peering over the canopy of trees padding the landscape and the birds flitting from tree top to tree top. After sunset, I began making my way down, but my adult weight was too much for the upper branch of the fir. It snapped. I lost my grip and fell, thinking "This could be it." That's all there was time for in my rapid 60-foot descent.

But when I hit the ground I was conscious: surprised to be alive, shocked that neither legs nor arms had broken, and amazed to have not been skewered. I attempted to stand up, but I could not manifest the idea of standing into the structure of my body as my T12, L1 and L2 vertebrae were shattered. Fear set in. I called out for help. Each call became weaker as the blood was flooding my lung cavity.

Blessedly, my friend Don Roberts was on his way to see me. He heard my call, ran to me, and then ran to get Susie his wife who comforted me while he called 911. Jason, a volunteer fireman who I knew from the lumberyard, arrived first. Others followed. They stabilized me and got me on a stretcher. On the way to the ambulance I was in a place of utter vulnerability and surrender. "I trust you God" was what came to my agnostic mind, along with the internal unconditionally loving voice of the inner parent "I love you Bill." I repeated each in turn as a mantra, a buoy of sorts.

I was delivered into the ambulance, where Stan the Vashon paramedic put a flutter valve in my chest and gave me oxygen. A helicopter was waiting in the park by the woods where we lived. Flight EMT Robyn soothed me as we flew to Harborview trauma center. My doctors there stabilized my spine with a titanium apparatus first. A week later they went through my side to extract bone from pelvis and rib cage, and combined them with fragments of the vertebrae, constructing a bridge and fused my damaged spine.

After just two weeks I returned to Vashon. Donald and Susie had installed a hospital bed where their kitchen table had been. Their 800 square foot house somehow had room for me, along with them and the periodic presence of 3 kids and a dog. The love of friends and family, along with the special nursing care of my new love Esther, paved the way for healing of my body and transformation of my life. In the fall I returned to school to study music. (Life is too short and precious not to do what you love!)

Eleven years later, some friends and I founded the Backbone Campaign. We choose the spine metaphor to displace the dismissive labels "bleeding heart" and "weak-kneed" that were often assigned to progressive-minded folks. Amazingly, it took months for me to realize that the Backbone metaphor may have jumped out at me from my own direct experience of loosing, and regaining, the power of the backbone.

For me, the metaphor of Backbone is more than personal courage for principled action. It’s more than the natural connection between causes unified by a common array of underlying values. It is also an instructive metaphor for building Power. One way to define power is the capacity to manifest your aspirations. Today, I see the metaphor of Backbone, and my experience of being on the ground unable to get up, as an analogy for aspirations without the power to realize them. A social movements is to our collective aspirations, what a functional spine is to a creature desiring to stand up. 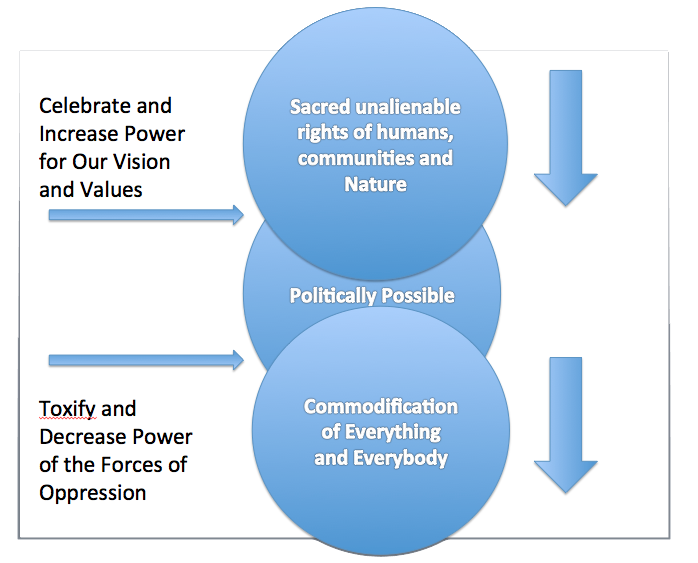 We can have infinite brilliant ideas or aspirations for a better world, but merely having those ideas and shouting them from the street corner to the halls of power is a waste of energy, and not much fun. It will only wear out your voice.

When training activists and organizers, I find it helpful to deconstruct the idea of "Political Calculus." It’s often said that politics is the art of the possible. Elected officials and others in positions of institutional power almost always do only what is necessary to remain electable or relevant to their constituents. That’s what they see as politically “possible” given the constraints of their public roles.

Calculus is the mathematics of changing variables. Our goal as agents of change is not to ask politicians or power holders for favors -- which in any case never works -- but to shift what is politically possible. We are victorious when we shift the social, political, or economic variables in a way that makes delivering on our demands - making our values and vision manifest in the society essential to their political survival and their connection and relevance to their constituents.

This is another way to translate the wisdom of community organizer Tom Kertes, formerly of Baltimore's United Workers. Kertes told me, "It is not the role of the change agent to ask for favors, but to build power." And, "You build from the power you have to the power you need."

As director of a movement-building organization called Backbone Campaign, I utilize my personal story of being on the ground, unable to manifest my aspiration to stand up, as an analogy for the importance of social movement for manifesting change. 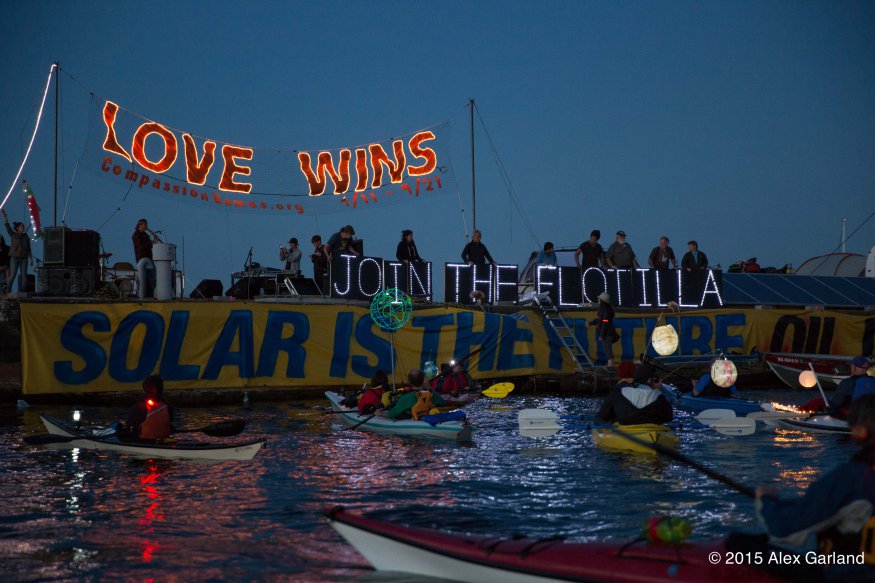 We build that movement power by using every campaign, every strategy, and every tactic to expand alliances, increase the cohesion amongst those allies, and deepen the resolve of our people. When we do that our social movement grows and we win. We win because our collective backbone becomes stronger - and together we change the variables in the political calculus, expanding what is politically possible - often making what was said to be impossible - inevitable - manifesting a world more aligned with our deepest values and aspirations.

Finally, the deep sense of connectedness I felt before the broken branch and shattered spine was also simple, real and rings true for me still. Nature is wondrous and beautiful. We are all part of nature and inextricably connected to it and to each other. Division is an illusion that undermines our power. Love is the connective force that draws us together to dream and co-author a beautiful future into being.

PS: If you too desire for our social movements to build the power we need to manifest the world we want, invest in Backbone Today.        March Forth with Backbone.    Join the Lumbar Club Today!