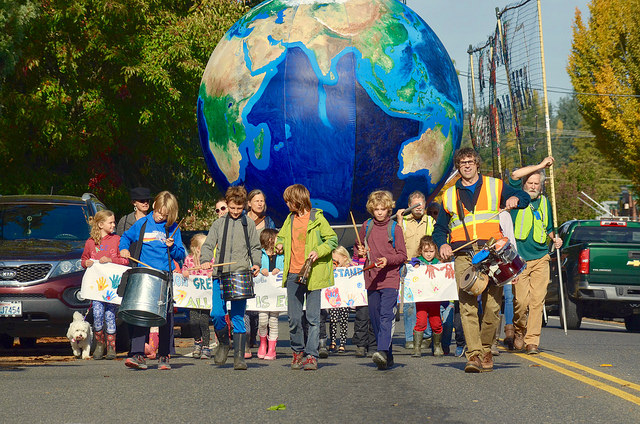 On Monday, October 23rd, more than 30 Vashon Islanders, including 17 youth, protested at Chase Bank, joining the global call to action #DivestTheGlobe. In 50 communities across the U.S. and on Vashon, concerned community members demanded financial institutions stop financing fossil fuel pipelines, due to their repression of indigenous rights, human rights abuses, the fueling of climate change, and the desecration of the earth.

Vashon’s colorful protest included youth marching in song with a 10 foot inflatable globe, a banner that read “Vashon Green School Supports Standing Rock - All Life Is Equal” and a 30 foot long banner that read “Stop Desecration of the Earth, Stop Funding Climate Destruction, Honor Indigenous Rights.” Youth sang inside Chase Bank. A letter (linked below), signed by some of the largest environmental organizations, was read, calling on Chase Bank CEO, Jamie Dimon, to divest the Bank’s holdings from investments in fossil fuels. Then account holder Mike McGrath cut his bank card in half, breaking the chains wrapped around him. Mike McGrath closed his account and severed his ties with Chase Bank until the bank ends all current and future investments in fossil fuel infrastructure. 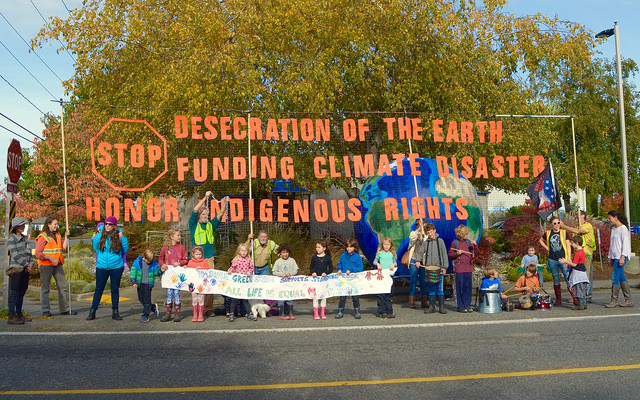 October 23rd through the 25th, 92 of the world's largest banks meet in São Paolo, Brazil to discuss policies on the climate and Indigenous People's rights to Free, Prior, and Informed Consent (FPIC). The Indigenous-led coalition of Mazaska (Money) Talks and Standing Rock leaders called on allies everywhere to join them for three days of mass global action.

Vashonites with a conscience joined this global call for action to show the banks that financing climate disaster and the abuse of Indigenous Peoples is not an acceptable business practice.

The solidarity actions across the world target the banks that fund the desecration of Mother Earth. These banks include Dakota Access Pipeline (DAPL) financiers such as Wells Fargo, Bank of America, J.P. Morgan Chase. They fund the destructive Canadian tar sands oil extraction that is seriously affecting First Nations' health, lands, and water, as well as worsening the climate crisis.

The action was organized by members of the Backbone Campaign. Participating youth were from the Vashon Green School as well as part of a homeschool network. This action is being called the largest bank protest ever. Organizers of 350Seattle aimed to mobilize actions at 100 bank branches. Protests continue in Europe, Australia and New Zealand on October 24th and in Africa and Asia on October 25th.

Beachcomber article about the action HERE