Arrest of Trump at Trump Tower in NYC 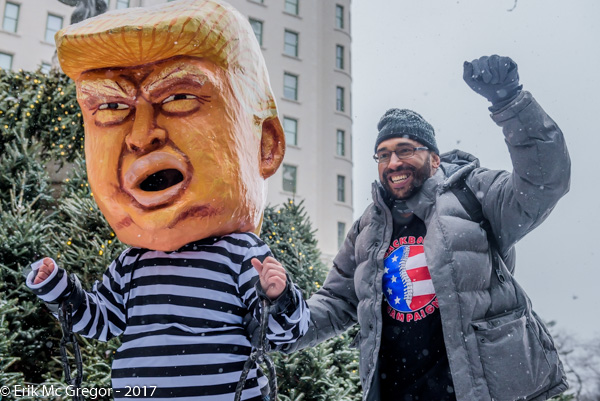 The People's Puppets of Occupy Wall Street, Rise and Resist and the Backbone Campaign are creative partners-in-crime fighting. Together, they staged a hilarious, people-powered arrest of Donald Trump at Trump Tower in NYC.

Bring this tool to your community to resist Trump's assault on our liberties and society's slide towards tyranny. With the equivalent of a renegade corporation at the helm of the highest office in the land, we've got to pull out all the stops.

The people of NYC helped Special Counsel Robert Mueller understand what We the People are demanding! Take your pick from the long list of arrestable offenses. Everyone who met the Embarassment-In-Chief Trump were happy for a chance to perform a Citizen's Arrest.

We gathered at the William Tecumseh Sherman statue at Central Park to stage a Citizen's Arrest of the Trump papier-mâché bobble-head. 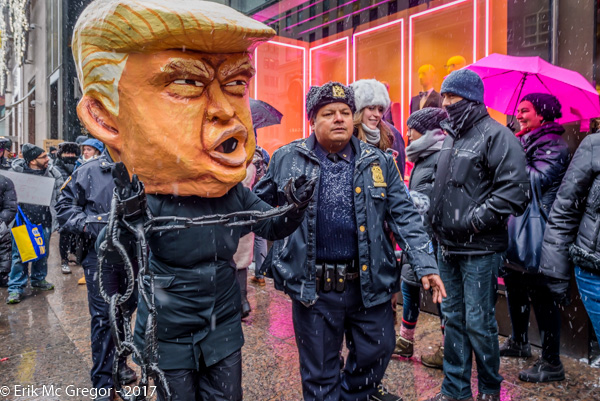 After letting people take some photos with the head and their messages to the President on a dry erase board we marched to Trump Tower with allies in police costumes "protecting" "Trump". At Trump Tower the people threw off the costumed "police" protecting "Trump" and allowed one of the children participating to effect a Citizen's Arrest of "Trump" by handcuffing him.

"Trump" was promptly escorted by the NYPD out of the area and they accompanied us the rest of the way. Back at the park "Trump" put on his prison stripes outfit and posed for more pictures with participants. We let everyone know we are looking to take the Trump head on tour around the country to have Citizen's Arrests and grow momentum for the impeachment movement.

This action, outside Trump’s residence in Midtown Manhattan, marked the kickoff of a nationwide tour of a giant Donald Trump puppet head demanding the United States impeach and remove Donald Trump and set a national standard for leadership and accountability. (Photos by Erik McGregor)

For more photos check out the Flickr album HERE.

Check out the Guardian article that featured the photo from this action.