A thing is right when it tends to preserve the integrity, stability and beauty of the biotic community. It is wrong when it tends otherwise.

Backbone Campaign has always aspired to lead with vision, to be “radical solutionaries” addressing root problems with solutions that “preserve the integrity, stability and beauty of the biotic community.” Because of the support of people like you, our incredible board of directors, and our able corps of volunteers - Backbone’s staff has the freedom and capacity to respond with nimbleness to emergent challenges AND opportunities, to support the front line of struggles and the creative edge of making change. If you can help by making a donation, please click HERE. 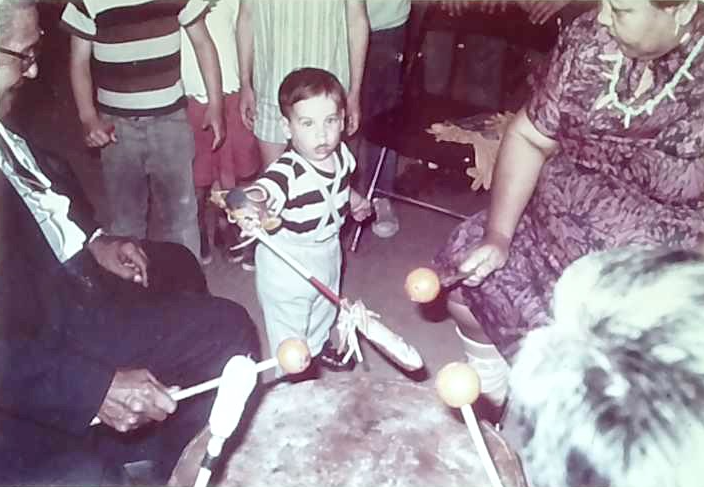 For my entire life, I have been honored to witness the leadership of Indigenous people. Until I was 12 years old, I lived on or near reservations. I’m 100% European mongrel, but my father worked for multiple NW Tribes in the 60s and 70s. My family was held close by the Yakama, Spokane, Flathead and Swinomish. I came home on a baby board gifted to my mom by a Yakama elder.  My first drumming and later dancing was at powwows, when I was too young to know how fortunate I was.

But I also attended a lot of funerals and witnessed the racism and trauma of cultural genocide. I still remember listening to a blind but very wise and compassionate elder, Ray Paul, tell of his time in the residential schools, the cruelty of being punished, whipped and mouth washed with soap for simply speaking his people’s language. Western Washington remained a dangerous place for Indigenous people during the Fish Wars and the Boldt Decision. I remember stories of hate group meetings and of shots fired at tribal police. Those were formative years for me. 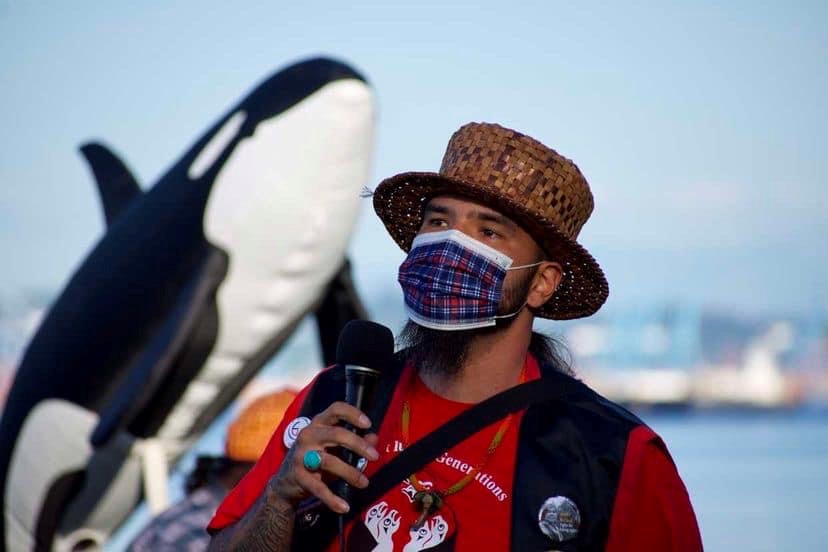 During my first stint at college in the 80s, I lived in a van on the streets of Seattle. That too brought me in touch with Native American men and women suffering the traumas of multiple generations. When I eventually burned out and dropped out, I went to live with a Dineh elder, Alice Benally at Big Mountain. Big Mountain remains a place where traditional Hopi and Dineh resist a forced relocation meant to give corporations access to yet more coal, oil and uranium. Herding sheep and chopping wood, I was humbled by the courage of the grandmothers who led that struggle.

Indigenous leadership consistently defines the struggles against a paradigm of profit and the defense of the sacred for future generations. And the timeline of these struggles is filled with victories. No one takes on the paradigm of greed with the same authority as our Indigenous brothers and sisters. Suing the railroads, the oil companies, the state and federal government, fighting for treaties to be recognized and for fish to remain for everyone’s benefit - the Northwest Tribes have been an inspiration, long before anyone dreamt up Backbone Campaign.

In the past decade of resistance to fossil fuels across the so-called Americas, Indigenous people have led the way to victory. In our region, without the Nisqually, Lummi, Swinomish, Quinault, Puyallup, Duwamish and more - we would not have stopped coal ports, oil export terminals, and methanol plants - not to mention Shell Oil’s Arctic drilling. Then in one of the US’s most recent dark moments, the election of Donald Trump, the countervailing light of Standing Rock shown in bright moral contrast. I am proud and humbled that Backbone could play a humble role and join in celebrating the victories and gains achieved.

I am also deeply proud and grateful to have grown up amongst these generous, courageous (and often deeply humorous) people. And I am grateful for the opportunities Backbone continues to have to show up as an organization for the current struggles being led by our Indigenous brothers and sisters. 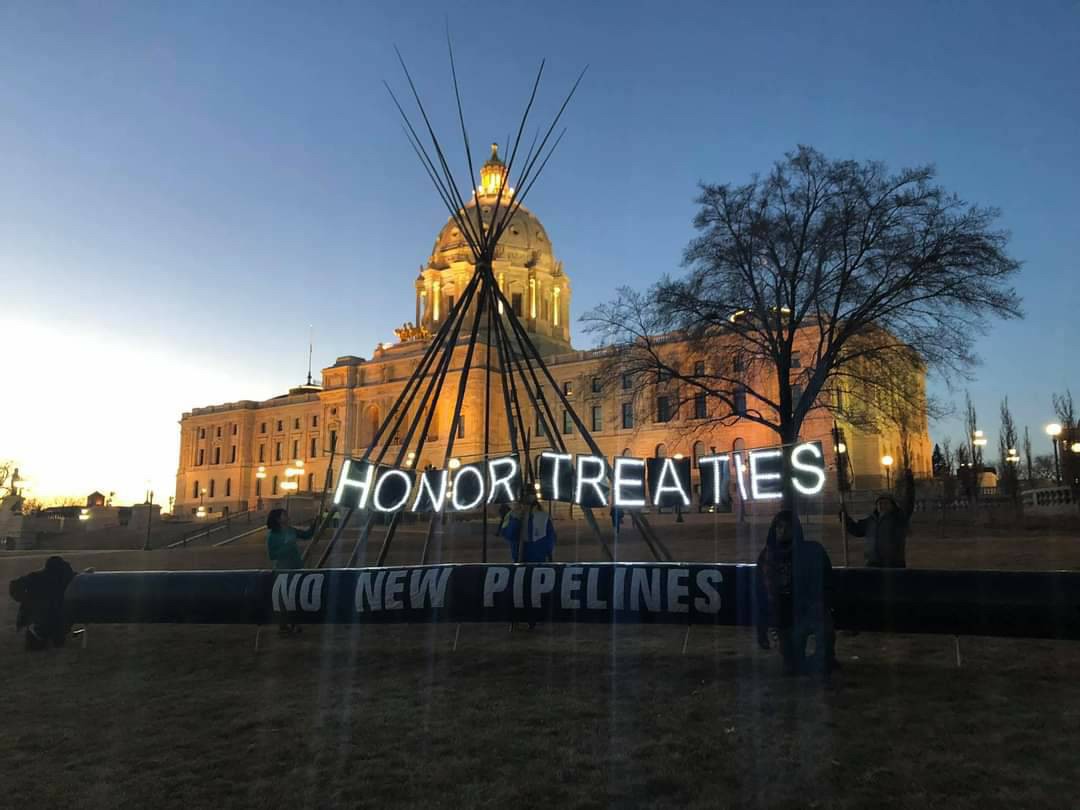 In the past months and weeks, Backbone CSO Jacob Johns and Phil Ateto journeyed to Minnesota to support action to Stop Enbridge’s Line 3. Multiple Backbone folks provided powerful imagery to bolster our Puyallup friends who continue to battle PSE’s Tacoma LNG facility. Based on the unceded land of the Puyallup, descendants of the sx̌ʷəbabš (‘Swiftwater People”), Backbone has recently facilitated the early stages of a process for finding a path forward that provides some healing and a measure of justice to those whose land we dwell upon. (More on that as it evolves.)

A couple weeks ago, Nimiipuu Protecting the Environment, a Nez Perce based organization, collaborated with Backbone to execute the longest distance, and one of the boldest projections we’ve ever done - projecting images 300 yards onto one of the Snake River Dams. The Nimiipuu have opposed these salmon-killing dams since before they were built. For the last six years, we’ve worked with them and other #FreeTheSnake allies around the region, calling for the breaching of the dams and the restoration of the wild river.  The wild Snake River salmon and steelhead are otherwise doomed to extinction.

Last month, the Affiliated Tribes of Northwest Indians (ATNI) passed a resolution in support of the Columbia River Basin Initiative proposed by Idaho Congressman Mike Simpson (R).  Tribes have been urging Governor Inslee and Senators Maria Cantwell and Patty Murray to support this plan. All three have unconscionably and consistently refused. But the pressure is building, thanks especially to tribes. Last week, over 500 tribes with the National Congress of American Indians also passed a resolution urging Biden and Congress to breach the four Lower Snake River dams and to fund the Simpson Plan to make all stakeholders whole.

In the coming week, Backbone will once again deploy a creative action team for this cause. We are proud to be supporting the Salmon and Orca Summit. I am personally hoping that we’ll follow this with additional support for the young, emerging leaders we look forward to meeting at the Summit.

Whether it be our emergent hyper-local decolonization work or our regional and national artful resistance support for anti-fossil fuel struggles, or Solutionary Rail - they all intersect and draw inspiration from Indigenous leaders and Indigenous values. Solutionary Rail has many potential intersections with the history and future power and leadership of tribes. Currently, the strongest might be through providing a win-win vision for tribes, farmers, fishermen, and salmon - by providing a path toward dam removal, decarbonization, and regenerative agriculture. Members of the Solutionary Rail team have begun research for a “Green Map” for the Columbia River Basin to bolster imaginations of a future that is resilient and where wild salmon are abundant.

Read our mid-year Report on some of the actions we've done, the progress with Solutionary Rail we've made, and the inspirational hyper-local resilience work we've organized. 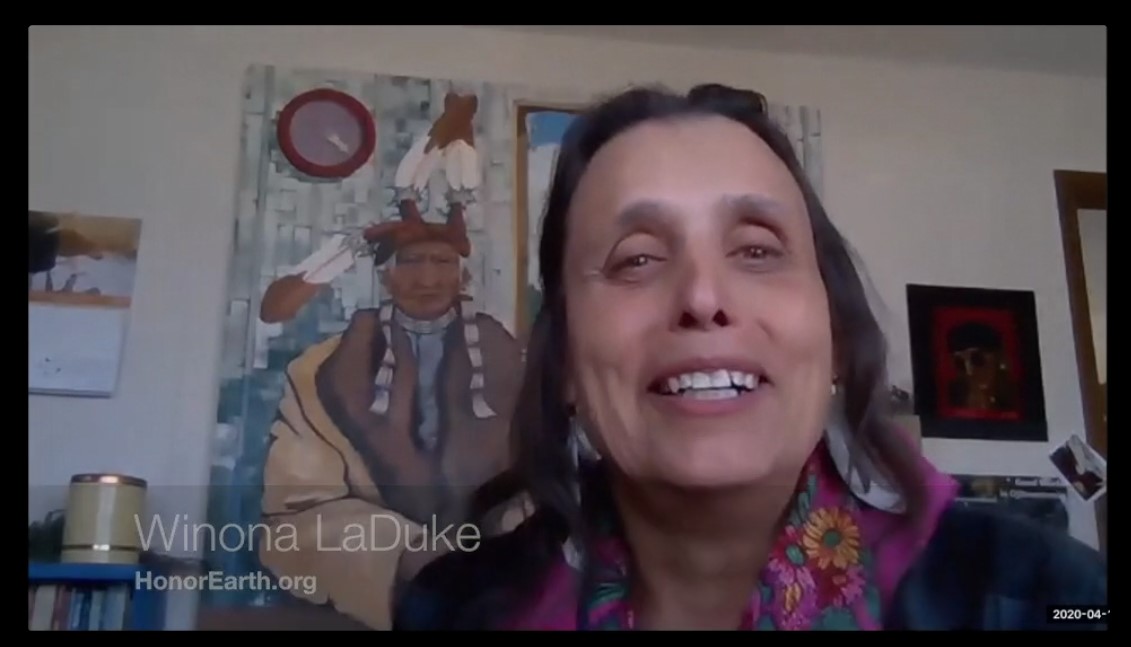 During a Zoomcast we hosted with Bill McKibben and Winona LaDuke - one of Solutionary Rail’s biggest champions - a question was raised about “re-indigenization.” Winona handled it with wisdom and generosity. To paraphrase: though non-Indigenous people will never have the history, or cultural connection that indigenous people have to this Turtle Island - nor do we carry the pain and trauma suffered by Native Americans, we can commit ourselves to taking care of, staying in and truly loving the places we live. One of the potential gifts of this pandemic is that we got permission to slow down and be in our places in a deeper way. She urged folks to “Be good to that place. Support the Indigenous people who are there. Build partnerships. Be there. Do your best.”

Backbone is doing our best and thanks to you and people like you, we’ve been able to grow into and be prepared for this transformational time. We have a breadth and depth that makes me deeply happy and proud of all we’ve built together. Backbone is finally expanding our core staff team. Here’s an intro to those folks and their roles:

Amy and I juggle the whirlwind of programs, communications, and training - getting out on the street for the fun stuff whenever we possibly can. Meanwhile, Linda keeps the books in line, while Danny wakes up early to rock our presence online.  Phil coordinates the Solidarity Brigades and DC actions and Laura turns chaos into order in the warehouse pre-and post-action, as well as assembling giant banners and staffing weekly Art Builds. Backbone just recruited our first ever “TD,” (Technical Director)! Justin Brandimarte is an exceptionally talented person, with a vast array of skills and talents, from film making to rewiring our gear to building a special website for larger groups that want to hire Backbone’s help for their progressive issue campaigns. This crew is always augmented by the most capable and coolest collection of talented volunteers.

Because we are a small organization, your support gets a lot done. That said, as you look through the photos and captions of some recent highlights, you’ll see that our visions are BOLD and AMBITIOUS. We have some young energetic folk that we’d like to bring on to help with some Solutionary Rail projects. Sustaining contributions and even stock donations will help us keep pace with opportunities and our generative vision. 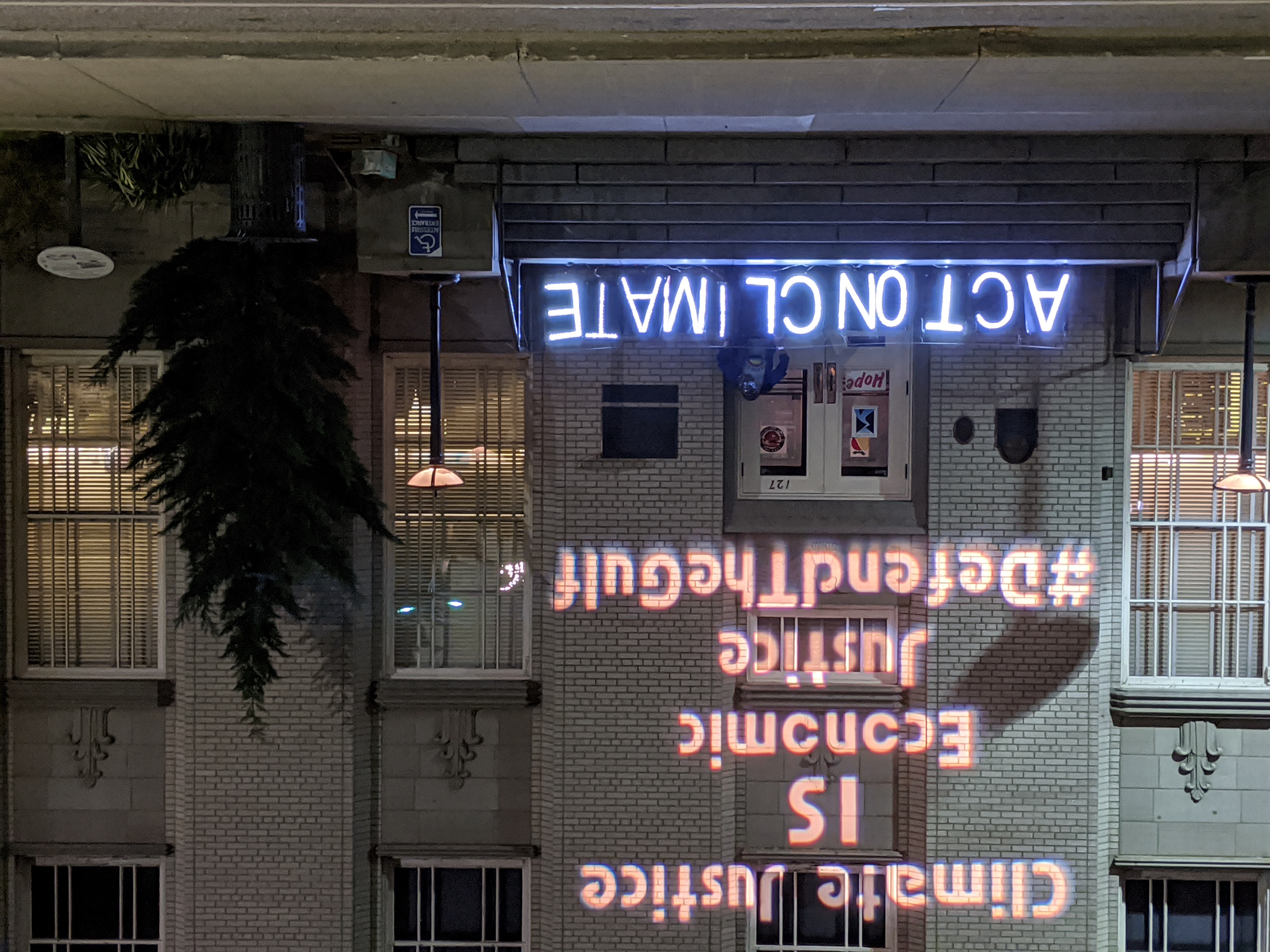 So please do what is meaningful for you, that reflects the boldness of your vision, the depth of your gratitude for the beauty we are protecting for future generations. Know that the energy and generosity of your donation is reflected in every photo you see and report you read.

Please click here to make a tax-deductible contribution.  If you'd like your donation to support our Solutionary Rail project, you can do so HERE. You can also mail a check to Backbone Campaign, PO Box 278, Vashon WA 98070.

Thank you for being with us on this journey and for being an essential member of Team Backbone in these pivotal times.

PS If you can, please consider joining the Lumbar Club by making a monthly donation that helps us have better financial security, so we can focus on our mission of helping communities stand up to protect what is sacred to them. In honor of our 18th year, our goal is to recruit 18 new Lumbar Club members in July. Will you be one of them? Please donate HERE - or call our office today (206.408.8058) to be part of the Lumbar Club, joining over 140 supporters who chip in with a recurring tax deductible donation each month! We can’t do this work without you.