Projectionists supported BDS Boston with their boycott of PUMA Campaign in solidarity with over 200 Palestinian sports teams.

BDS Boston is the Boston chapter of BDS, Boycott, Divest, Sanctions movement in the greater Boston area. Boycott, Divestment, Sanctions (BDS) is a Palestinian-led movement for freedom, justice, and equality. BDS upholds the simple principle that Palestinians are entitled to the same rights as the rest of humanity.

This action was part of a local campaign by BDS Boston to disrupt PUMA's business in our community, in solidarity with the over 200 Palestinian sports teams who have been leading an international campaign to pressure PUMA to end their current 4-year sponsorship agreement with the Israeli Football Association.

The projectionists were successfully able to project the word Boycott next to PUMA's large logo which sits atop their corporate headquarters. By sharing the photo of this projection on social media, the campaign was able to summon a particularly large and rowdy crowd of protestors to a picket-line protest on the following day in front of PUMA's flagship outlet store (a block away from their corporate HQ). This crowd on Saturday was so large and energetic that PUMA was forced to temporarily close their outlet store, in the midst of the Holiday Shopping season. 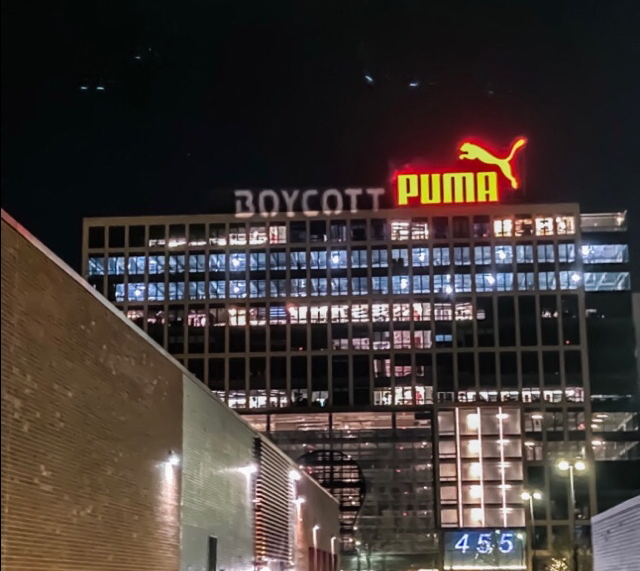