Maury Island & The Fight To Save Puget Sound Signup

Want your actions to have a bigger impact? Fill out the form below to connect with Backbone! 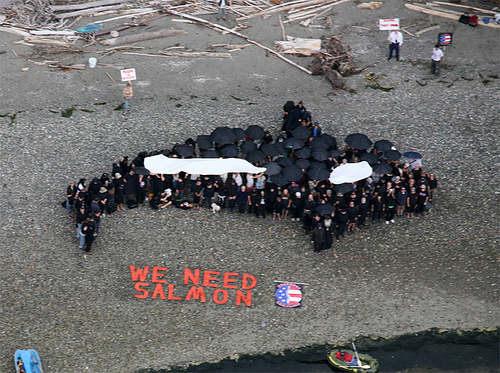 In 2008, a 10-year long legal battle to prevent a corporation from building a gravel mining operation on Maury Island, failed. 10% of the land mass of a Pacific Northwest island across from Seattle could legally be destroyed by the extraction of gravel. The project had been vehemently opposed by the community. They vowed to keep fighting out of concerns for the potential release of toxic arsenic and the disruption of vital and sensitive ecosystems. Backbone Campaign supported a community organizing and direct action campaign that earned sympathetic media attention. It swelled the number of people taking action from 50 to 500+, and mobilized people to get out on the frigid waters bordering the gravel mine. They put their bodies and boats on the line to creatively disrupt mining operations. As part of the campaign, we invited direct action trainers from the 1999 WTO to the first Localize This! action camp. The direct action campaign was successful and what would have been destroyed is now a public park. It is being restored as the longest stretch of undeveloped beach in the county.The community organizing and direct action campaign on Vashon and Maury Island that became known as the "Fight to save Puget Sound," was a transformative experience for Backbone Campaign. The lessons learned and the victory story that emerged continue to inspire and inform activists across the country.

Watch the videos below to get a sense of how the variety of escalating tactics steered the course away from defeat and to a victory for the community and Puget Sound.

We hope to hear about the stories that inspire you. We would like to share ideas and strategies that all of our actions and campaigns can benefit from. Fill out the form below to connect with us! (The following page offers a deeper dive into the timeline towards this victory)