Backbone trained Maryland's Communities United in how to do light projection for their Defund to Refund Campaign. 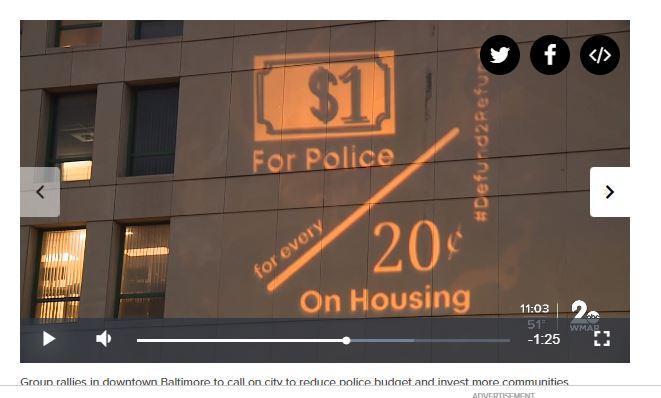 The projection utilized an LED light and acetate GOBOs, a recent development in our creative activism tools repertoire.  The projection and rally was featured on the nightly local news.

Why do we say #Defund2Refund?
The city’s spending should reflect the values and needs of the communities we serve. Black communities need stronger schools, better city services, and other resources, not over policing or a lack of resources due to police over-spending.
We want a budget that reflects the values of our communities, not one that comes from political posturing.
Policing reform is welcome, and is not an argument against #defund2refund- we need both!
A 25% reduction in police spending will ‘rightsize’ our police spending and bring Baltimore in line with the next most expensive police departments nationwide.
Spread the word.
Tweet