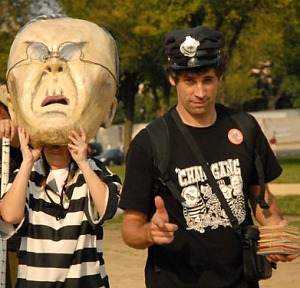 Bill Moyer co-founded the Backbone Campaign in 2003 with friends from an artist affinity group. He has dual and intersecting paths as both an activist and artist. His involvement with social change work stretches back to the 80's, when as a student he was deeply involved in the anti-nuclear movement and the anti-interventionist movement. After a few years of studying political science and American philosophy at Seattle University, Bill went to Big Mountain to assist Dineh elders refusing to relocate off their traditional land, attended the Institute for Social Ecology, and briefly lived on an organic vegetable farm in Vermont.

On returning to the Pacific NW to live on Vashon Island, activism was replaced with performance and study of music as a percussionist and sound designer. The G.W. Bush administration inspired him to apply lessons of the arts to social change. Backbone Campaign has been a vehicle for much growth and Bill has emerged as a leader in the theory and practice of "artful activism." He designs and produces creative political actions and provides trainings in grand strategy and creative tactics around the country.