In Solidarity With The Poor People's Campaign: Madison, WI

Members of the Madison, WI Solidarity Brigade projected imagery in solidarity with the Poor People's Campaign. 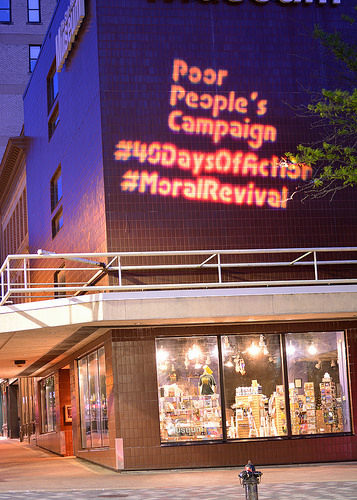 Folks met on Capitol Square to draw some attention to the Poor People's Campaign. They came equipped with a spot projector with image slides provided by the Backbone Campaign. These images were projected in a couple locations an the set up was pretty simple but, they drew a fair amount of attention, and sparked some great conversations about the movement and OWR.
"We definitely have a beautiful capitol and square surrounding it and it made a great backdrop for our statement tonight. A very sobering moment was when we were packing up and I turned 90 degrees to my left (now note that I had not moved from the location where I was taking pictures and only turned to my left) when I viewed at least 10 homeless that were bedding down for the night next to the Veterans Museum. Many with an assortment of blankets and sleeping bags and personal belongings. And to top this off, as I walked by the Veteran's Museum to go to my car a young woman with a child of about 6 or 7 who had been watching us with the projector and taking pictures, asked "Are you doing this for us?" Talk about being dumbstruck and at a loss for words. After a moment I said, "Yes, we're trying to get people to pay attention to the injustice that's happening." I invited her to the PPC rally this Monday and asked her to bring friends. Things are just not right, and I'm glad to be working with people trying to change this. Thank you." ~ Brian with the Madison Solidarity Brigade 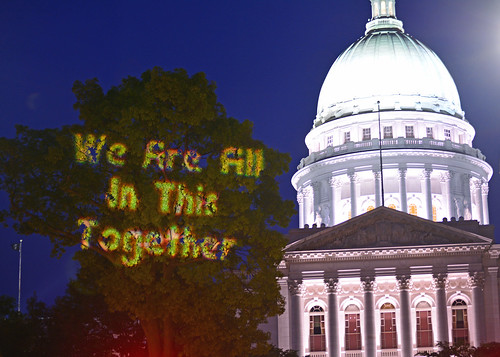