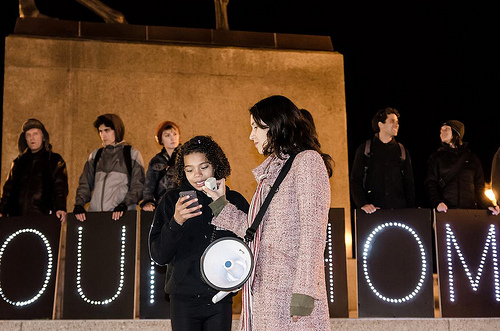 Kelly works with a number of organizations, devoting a great deal of time to Occupy Rogers Park (ORP), which is one of Chicago's neighborhood Occupy groups. During the past year, Occupy Rogers Park engaged in very intense anti-austerity organizing, including the creation of an encampment that was occupied in opposition to mental health clinic closures in Chicago. Supported by members of ORP, and in collaboration with Overpass Light Brigade, Kelly organized Occupy Chicago's 2012 S17 celebration. Kely also participated in the planning of the NATO protests last spring, including the successful shutdown of Boeing's headquarters in Chicago. Right now, Kelly is primarily focused on housing rights, home reclamations, and organizing resistance to the upcoming school closures in the City of Chicago.

Kelly related "When I attended the Backbone Localize This Action Camp, I learned a great deal from some amazing people. Both the instructors and the campers brought a wealth of experience to the table, and the friendships that I built at the camp are ones that I believe will enrich my life and work for years to come. I am very much looking working with those friends again, and to meeting activists who will be new to the camp.  I'm sure we are all going to learn a great deal from one another."