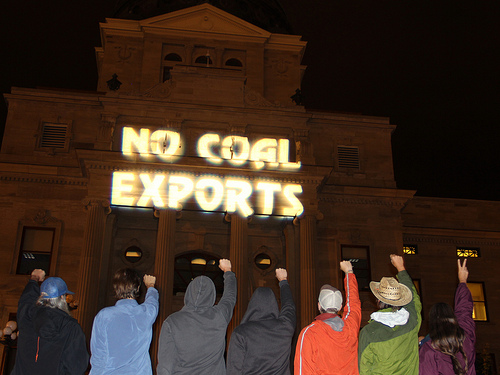 Projection as protest is a fun and easy tactic to master. It's relatively cheap and potentially super effective. Sometimes also called a "Bat Signal" the use of easily procured theater lights and metal stencils (GOBOs) to amplify your message is one of our favorite tactics among our allies.

Your imagination is the only real limitation. Projection as protest can be used to project on a target exposing their criminal and unjust behavior like HSBC laundering hundreds of millions of dollars of drug money, as a way to raise awareness of a lesser known issue like for-profit-prisons, build solidarity and cohesion among your group, or recruit new allies because it's so fun. After-all, who doesn't want their picture taken holding a "light canon" projecting a message like "Sucks!" on a Bank Of America headquarters building. Even better, it's a very low-risk action, ever heard of someone being charged with trespassing with light? If you've got a message and advanced notice we can guide you through an action out in the field.

We are excited to help you amplify your activism with our workshops and trainings. Fill out the form below to let us know you're interested in hosting or attending one of our workshops.

(In the comments section feel free to let us know anything else about the campaign or actions these workshops might bolster.)