Reflections on Power and Beauty of Kayaktivism 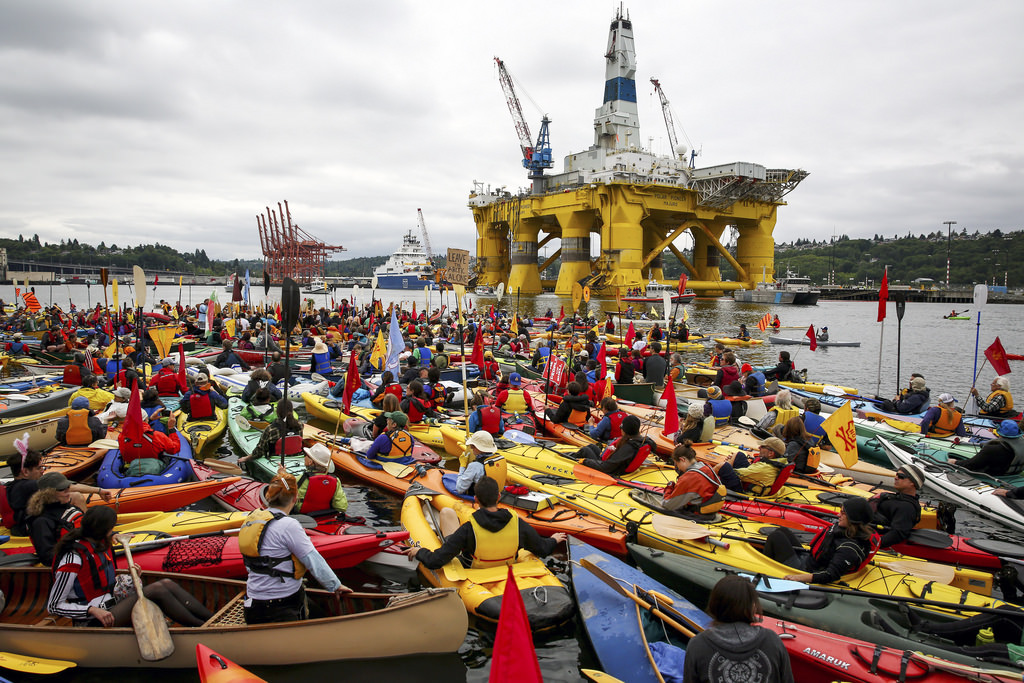 Of all the tactics I’ve utilized with Backbone in the past 12 years (and we've used many), kayaktivism is inherently the most beautiful.  It is gorgeous to be on the water, where the collection of colorful kayaks creates a giant, floating mosaic. Kayaktivism requires people to look out for and support each other. I found that being on the water, my body and mind fully engaged reinforced a sense of place.  Doing this alone and especially with others, connected me to the deepest reasons for doing this work.

I co-founded and direct the Backbone Campaign.  For the last 12 years I've had the honor to work with an array of incredible people who practice what I call Artful Activism. They are autonomous, creative change agents, a sort of nonviolent guerrilla force with the improvisational sensibility of a free jazz ensemble. They are bold, innovative, skilled, smart and listening deeply to the world around them. Together, we are Team Backbone.

Meetings are rare and somewhat scorned, but potlucks and parties are well attended. We prefer action. Whether using puppets, shining messages onto buildings, deploying a flash mob, a blockade, or a flying banner we strive to transform protests into cultural happenings to more effectively reach peoples minds and hearts.

Though we work on many causes, Backbone frames it all as part of one battle between paradigms. One paradigm idolizes capital, gives corporations rights, and considers everything For Sale. It commodifies people, democracy, communities, and the planet itself. The paradigm we fight for is one in which people communities and nature and our obligation to future generations are considered sacred, and clearly NOT for sale.

If last year, someone asked, "Could Team Backbone throw together a protest on Lake Washington with a few dozen kayaks, a couple motor boats and some giant banners off shore from the mansion of the world’s richest man? Oh, by the way, how about in two weeks?" I would probably have said, “Sounds cool. No freaking way.”

Actually, this October someone did ask and my response was, “Sure, no problem.”  After all we have been through this past spring and summer during the sHellNo! campaign, this was an easy lift.  Our crew of artful activists have adapted our methods to the water and found our groove with kayaktivism: the use kayaks for nonviolent action.  So, we accepted the challenge and staged a flawless on-water protest to get the Bill & Melinda Gates Foundation to divest from fossil fuels.  [This week, we learned that the Gates Foundation has begun the divestment process.]

Staging a protest with kayaks is not entirely new to Backbone. In 2009, kayaks were part of a community campaign to stop an industrial gravel mine on the shores of Maury Island, next to Vashon Island. During that campaign, Backbone trained a rapid response team of volunteers for an on-water blockade of a construction barge.  After months of action and preparation for the flotilla the politics shifted and victory was won in court. The mining company had to go back to the drawing board.  So, instead of mobilizing the blockade we threw a party.  Now that site is a park and that experience gave Backbone Campaign a strong sense of the potential power of on-water action.

So, this past spring when Royal Dutch Shell planned a layover for an Arctic-bound oil-drilling rig in the Port of Seattle, and Port Commissioner Bill Bryant made light of the possibility that they might be threatened by a “flotilla of kayaks,” we felt just confident enough to oblige him.  We knew it would take a great deal of preparation.  On April 2, we called for people to “Join the Flotilla!” And our deep dive into kayaktivism began.

With the blessing of the Duwamish Tribal Chair Cecile Hansen, upon whose land and waters these protests would take place, and the essential collaboration of Alki Kayak Tours, we embarked on an aggressive training schedule.  As part of what became known as the sHellNo! action council, Backbone took on the task of ensuring water-borne protestors had the skills and equipment to safely hit the water.  Our team trained hundreds of people. Over the course of four months, we hit the water in seven towns, from Port Angeles to Portland, Ore.  We helped execute 14 on-water actions, most during the day but many at night as well.

Of all the tactics I’ve utilized with Backbone in the past 12 years (and we've used many), kayaktivism is inherently the most beautiful.  It is gorgeous to be on the water, where the collection of colorful kayaks creates a giant, floating mosaic.  In order to prepare for possible 24 hour blockades, low risk nighttime activities were a welcome necessity.  Luminaries, i.e. colorful lanterns mixed with live hip hop, Coastal Salish drumming and Paul Cheoketen Wagner's incredible flute playing reflected and echoed off the calm evening waters. Photos from the events continue to inspire, but kayaktivism is more than mere visual spectacle or musical venue.  These experiences transformed those who participated, including me. Kayaktivism builds community. Kayaktivism requires people to look out for and support each other.  That was beautiful to witness.  I found that being on the water, my body and mind fully engaged reinforced a sense of place.  Doing this alone and especially with others, connected me to the deepest reasons for doing this work.

These protests also changed people who did not make it onto the water but witnessed from afar.  Our kayaktivism resulted in unprecedented news coverage of Arctic drilling.  The previously remote issues of Arctic drilling and climate change became rapidly and inextricably linked in people’s minds and tangible here in the Pacific Northwest and across the globe.

Kayaktivism opens up potentially vast new terrain in moral conflict.  There are access issues related to white privilege and cultural obstacles that must be tackled head on, yet kayaktivism remains unique in its strategic value.  Kayaktivism offers a way to expand alliances, increase cohesion and deepen resolve. We found that bringing protests onto the water brought new people into our movement who would have otherwise never shown up.

The epic David-vs-Goliath asymmetry creates an inherently sympathetic scenario. We found this to be true even when escalation pushed people beyond their usual boundaries, including evading law enforcement.  Our morally unassailable position allowed us to challenge the Coast Guard's role defending our opponent (a foreign corporation with a criminal history).  They suffered doubt about the legitimacy of their orders and actions when challenged.  We found authorities less likely to use lethal force on the water.  This may be partly due to the demographic of the participants, but is also likely because the very definition of lethal force shifts dramatically when conflict on the water multiplies the potential for drowning.  Team Backbone has always made safety our first priority.  We are taking the spread of Kayaktivism very seriously, making sure an emphasis on preparation and safety training remains paramount.

Safety is not the only challenge. Coordination of and communication during an on-water protest is extremely difficult. Overcoming access and cultural issues requires a great deal of attention.  Preparing people to rapidly deploy and attention to visibility, hydration and other safety issues takes great care, but it is all worth it.  By facing these challenges, our team grew in numbers and experience, learning, struggling, and paddling together.  We grieved together when our plans for a final blockade in Seattle was undermined and celebrated what we were accomplishing and creating together none the less.  We celebrated yet more when our work was rewarded with victory.

In late July, as I returned from the Portland blockade, I was reeling with emotions about the four-month campaign. I had a clear sense that despite Shell vessels getting to the Arctic, everyday citizens — the People — had actually already won.  The roaring sound of hundreds of people on the shore chanting, “Stop that boat! Stop that Boat!” while people in the water defiantly disregarded law enforcement claims that they could close a river to us but not to Shell echoed on in my memory.  Together, we had created the momentum for a resistance that would only grow.

I'm sure that the prospect of that growing resistance made a lasting impression oil executives and politicians alike.  Shell executives must have realized that with ten years before they could hope to sell a drop of oil from their Arctic ventures in the Chukchi Sea such a public uprising  would make it impossible for politicians to pave the way for their plunder.  Therefore, it was not surprised when Shell made its September announcement about abandoning its Arctic drilling plans.  Our growing rebellion was largely responsible for what Shell referred to as “the challenging and unpredictable regulatory environment.”  Nor was it a surprise in October when President Obama, jonesing to leave a positive climate legacy, cancelled Arctic leases for the foreseeable future.

Today, Team Backbone is undaunted by the prospect of on-water action in front of the Gates estate or elsewhere.  Our team knows what is needed to take care of each other and draw in new kayaktivists whether expert kayakers of those getting their paddle wet for the first time.  Our leap in capacity feels freaking miraculous. And yet, it all seems a very natural outcome, flowing out of our shared journey.

Momentum is now ours and Kayaktivism is on the rise. It is being used to force removal of derelict dams, to resist pipelines and liquefied natural gas terminals and even to pressure billionaires to divest from fossil fuel.  Now is the time for a great pivot toward a world that sustains us all in body and spirit, one that honors our sacred obligation to deliver something beautiful to future generations.  Kayaktivism is an important tool for making that pivot.

PS: If you are inspired by people stepping into their courage and taking bold action, help us support them with the training and tools they need to safely take direct action.   Join the Lumbar Club Today!