Join the Fight for Real Democracy

Backbone has partnered with Popular Resistance to pull the Trans-Pacific Partnership (TPP) out of the shadows of secrecy and has invigorated the movement fighting for Real Democracy.

Want to join the movement that is Fighting for Real Democracy? Feeling Inspired? Fill out the form below and we'll connect you with creative tools, tactics and other passionate change agents!

Today the future of the TPP is uncertain. The massive treaty, which is being negotiated between twelve countries, under unprecedented secrecy, has global implications. The TPP would elevate corporate and investor interests over all others', allowing them to override sovereign law and sue governments for any environmental and labor standards that might inhibit future profits. In 2012, there was virtually no media scrutiny and it seemed like the TPP would pass without much fanfare. Now there are more than 100 organizations opposed to the fast tracking of the TPP and it has become a hotly contested issue for the Obama administration and Congress.

Prior to the efforts of Backbone Campaign and Popular Resistance in 2012, hardly anyone knew what the TPP was, and the few other NGO's or labor union representatives who were quietly working on it were just trying to get a kinder, gentler version of the treaty. To reframe the debate and pull the TPP out of secrecy and into the spotlight of scrutiny, we launched Flush The TPP with a series of high visibility direct actions. During negotiations in Virginia, we blocked 5 lanes of traffic using banners and a technical tripod blockade; we hoisted a giant "Free Trade My Ass" helium buttocks with a roll of "Flush The TPP" and garnered numerous media hits, which emboldened the resistance here in the US and beyond.

To continue to escalate and directly put pressure on Obama and the USTR while negotiations were being held overseas, we organized actions that one Washington Post journalist exclaimed, "[A]s pure guerrilla theater... could rank among the best ever." We scaled the 5 story building of the United States Trade Representative's offices and redecorated the facade with 5 banners, demanding an end to the "Corporate Coup" and the secrecy surrounding the treaty and a release of the text. (This was no small feat, because the building is in one of the most secure areas of Washington D.C., with the White House Executive building right across the street.) The next day we took over DC streets with a "Don't Fast Track a Train Wreck for Democracy" train with murals depicting how Toxic the TPP would be for People and the Planet. (See the video below for the banner drop action)

Shining a Light on TPP Secrecy - Wanting to keep the momentum up during the fall, leading up to an International Day of action in the winter, we mobilized and helped equip grassroots activists with night-time visibility tactics like Guerrilla Light Projection. The activists in 13 cities coordinated their efforts, to earn media and activate many progressives who were still unaware of the TPP and its pervasive and potentially devastating impacts. (See the video highlights below). We collaborated with Washington Fair Trade Coalition to organize a weekend action camp that put creative tools and tactics into the hands of activists in the Pacific Northwest. In January we supported a cross-border event, connecting US organizers with those in Canada and Mexico. Action Brigades continued to self-organize actions in their own communities to pressure and educate their representatives, who were largely unaware of the ramifications and secrecy surrounding the TPP. 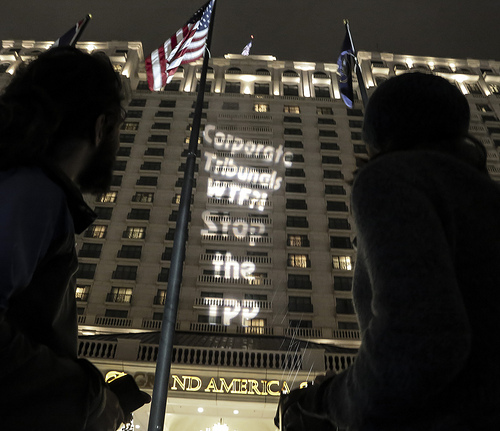 Salt Lake City Negotiations -  To speed up negotiations of the TPP, a surprise round was scheduled with short notice, in a location where they thought they would encounter little resistance - Salt Lake City, UT. In less than a week after the meeting was posted, we loaded up our 26 ft. box truck with imagery and creative tactics and headed to SLC. Working with the SLC community, which was already swamped with their own campaigns and Citizen's Trade Campaigns, we organized 9 days of actions. While WikiLeaks was releasing some of the text, we worked to bring the TPP out of the shadows and into the headlines. We held actions night and day and interacted with international delegates, who were emboldened to stand up against bullying by the USTR. Negotiations deteriorated, resulting in an extension of multiple days. We employed Guerrilla Light Projection, giant LED Light Panels, huge and diverse banners, noise demos, marches, and helium balloon assisted banner lifts. The variety and creativity of our tactics energized activists globally and earned headlines nationally and internationally. 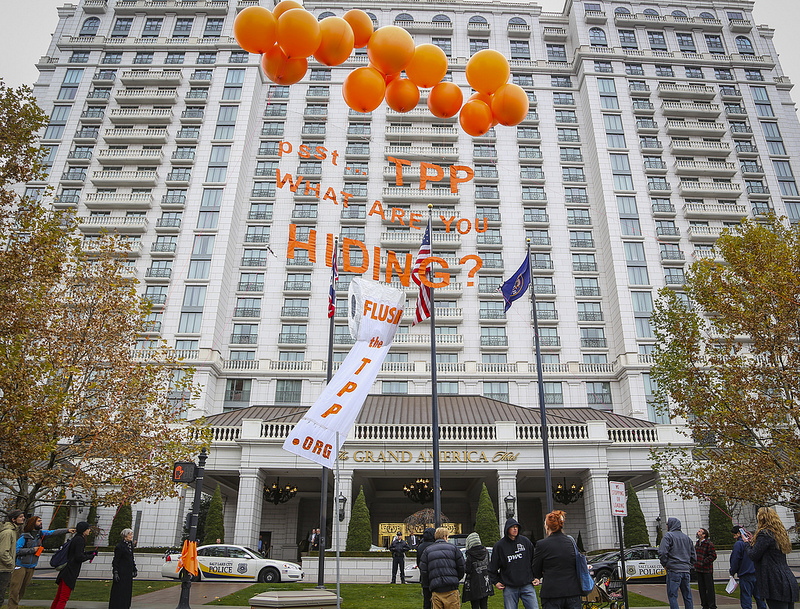 Rolling Rebellion for Real Democracy - To connect the fight against the TPP with what we saw as a ongoing fight against corporate control and the subversion of democracy, we worked with Occupy.com, Popular Resistance, and many grassroots organizers across the country. Together we launched the Rolling Rebellion for Real Democracy. It's a collaboration between many organizations, working together to facilitate a series of non-violent, artfully rebellious events around the country. Using creative, high visibility actions, we hi-light the emergent US Democracy Movement, and spur on its escalating fight for real democracy - to fight corruption and bring power back to the people. Since the TPP is a global manifestation of the same corrupting influence of corporate interests in government as exhibited by Citizen's United, rotations of the Rolling Rebellion have focused on getting money out of politics and fighting for Net Neutrality, as well as the TPP.

Why a Rolling Rebellion? - From corporations claiming unalienable rights as “corporate persons” to billionaires manipulating elections with their wealth – our federal democracy is corrupt to the core. Every issue that we care about stems from this systemic corruption. It is time to tap into the United States’ revolutionary roots and in the spirit of the Declaration of Independence instigate a second American Revolution against oligarchic rule.

Want to join the movement Fighting for Real Democracy? Feeling Inspired? Fill out the form below and we'll connect you with creative tools tactics and other passionate change agents!