Pitch-in HERE if you appreciate the creative organizing and community activism of the Backbone Campaign.

[Background: In late November the Department of Ecology published their review of the environmental assessment or "characterization" of the former K2 factory property on Vashon. This is the result of your activism and Backbone Campaign's organizing in the winter of 2014. Our petition to King County resulted in their requirement that any site on Vashon listed as "contaminated" or "suspected to be contaminated" with the Washington State Dept. of Ecology (DoE) must receive a No Further Action Letter from DoE before any change of zoning or conditional use permit is issued.

That resulted in K2Sports, under the ownership of Jarden Corporation to enter the DoE's Voluntary Cleanup Program. K2 went back to the drawing board to do a real site characterization to assess presence and levels of contaminants. When they submitted their September 2015 report, it indicated that yes, contaminants exceeding minimum mandatory clean-up levels are present. The Nov. 23, 2015 opinion letter from the Department of Ecology was the next step in the process leading toward cleanup. It accepted much of the work K2Sports/Jarden's contracted engineers at ERM had done, but rightly asked for further definition of the toxic plume under the building. ]

In early December 2015 the Backbone Campaign commissioned  the below technical memorandum from Farallon Consulting to review the characterization submitted by ERM on behalf of K2 Sports on September 9, 2015 and build upon the opinion letter by Dept. of Ecology.  It focuses specifically on the TCE (trichloroethylene - a degreaser/solvent) contamination.  Its findings are largely in accord with the Department of Ecology's opinion letter issued in November.  Our memorandum recommends some additional investigation due to "data gaps" that may expand upon the DoE opinion letter requirements.  Backbone submitted the Farallon technical memorandum to the WA State Dept. of Ecology on December 16, 2015 to be entered into the public record. 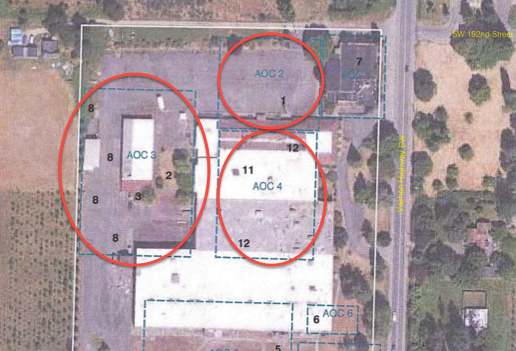 It is the Backbone Campaign's position that having TCE in Vashon's groundwater over a sole source aquifer and the potential risk to public health is serious.  Farallon's additional analysis  makes a clear case for  further investigation of the concentrated contaminants in the soil continue to contaminate ground water decades after production has ceased. Identifying these sources prior to determining the cleanup plan seems a prudent sequence for an efficient remediation process.

Quoting from the discussion and conclusion sections at the end of our  memorandum by Farallon engineer Clifford Schmitt: ["AOC" = area of concern]

Section 4.5 Discussion of Results.
The source areas contributing TCE to groundwater at AOCs 3 and 4, and potentially at AOC 1, have not been identified or characterized. TCE should be considered a contaminant of concern for soil and indoor air until more thorough characterization of the source and extent of contamination has been completed.

The points of release of TCE to soil at the Site were not identified. In order for future cleanup actions to address contamination by TCE and its degradation products cis-1,2-DCE and vinyl chloride to be successful, all sources (i.e., areas where soil contamination is present) must be identified and addressed during the cleanup. Based on this preliminary review of the Site Characterization Report, the consultant discounted that soil contamination exists and did not include TCE in soil as a contaminant of concern. Based on the configuration of contamination in groundwater and known size of the TCE plume in groundwater (i.e., approximately 4 acres), multiple TCE sources are present at the Site.

Section 5.0 Conclusions.
Insufficient data was collected to support the statement that “it is likely that any residual TCE source areas in soil are either very small in area, or have naturally attenuated.” Substantial additional characterization is necessary, particularly at AOCs 3 and 4, to locate the continuing sources of TCE to groundwater. Multiple source areas likely are present at each AOC. As a first step, soil gas surveys could be performed on a grid pattern not to exceed 25 feet across each AOC. The soil gas analytical results could then be used to better target features and areas for further soil and groundwater sampling. Results for each area should be depicted on significantly more detailed maps showing historical use and features, including the locations of chemical storage and use areas, vapor degreasers, and the sanitary sewer and storm drain lines.

The Department of Ecology, in their recent opinion letter also deemed ERM/K2Sports' work "sufficient to select an appropriate cleanup standard and to begin a FS," [feasibility study] BUT with qualifications and caveats throughout the opinion letter - most notably that of the requirement that the TCE plume be further characterized.

Backbone's technical memorandum takes a slightly stronger position suggesting the delay of FS until more is known regarding the sources of TCE plume, concluding that the ERM statement “under Chapter 173-340-350 WAC [Washington Administrative Code] is sufficient to perform a feasibility study and complete a draft cleanup action plan” is incorrect.  Schmitt continues...

Substantial additional investigation is necessary to identify the locations of sources that are causing long-term contamination of groundwater, and the extent of TCE, cis-1,2-DCE, vinyl chloride, and petroleum hydrocarbons in groundwater needs to be defined in order to complete the remedial investigation in accordance with WAC 173-340- 350(7). After the sources and extent of contamination have been more fully defined, potential feasible remediation technologies for cleanup can be evaluated for the Site.

It is also our understanding that Water District 19 will soon be doing a test that includes testing for TCE and other VOCs. We applaud that.  Hopefully, nothing will have reached the nearby WD19 well field.  We have been told that it would be far better and cheaper to fully characterize the plume and remove any concentrated sources of contamination and begin remediation of the plume prior to the migration of those contaminants into the well field or elsewhere.

We at the Backbone Campaign are grateful to our public servants at the Department of Ecology's Voluntary Cleanup Program for their excellent work. We are also grateful for King County's leadership and attention to public concerns on Vashon Island.  It is incredibly important for us to know that our agencies and elected officials have our backs in ensuring a process that safeguards our public health and our environment.  We commend K2 Sports for working hard to make good on their commitment to fully address the K2 contamination.  We trust that all the above will continue to do their part and utilize the additional analysis and recommendations Backbone is bringing to this process on behalf of our community.

[PLEASE pitch-in HERE if you appreciate the creative organizing, community activism of the Backbone Campaign.]

[PLEASE pitch-in HERE if you appreciate the community activism of the Backbone Campaign.]