With nightfall happening earlier, Backbone activists across the country are at the ready to light up the darkness, taking a stand to protect what you love - justice, orca and salmon, clean energy, a future worthy of our children. 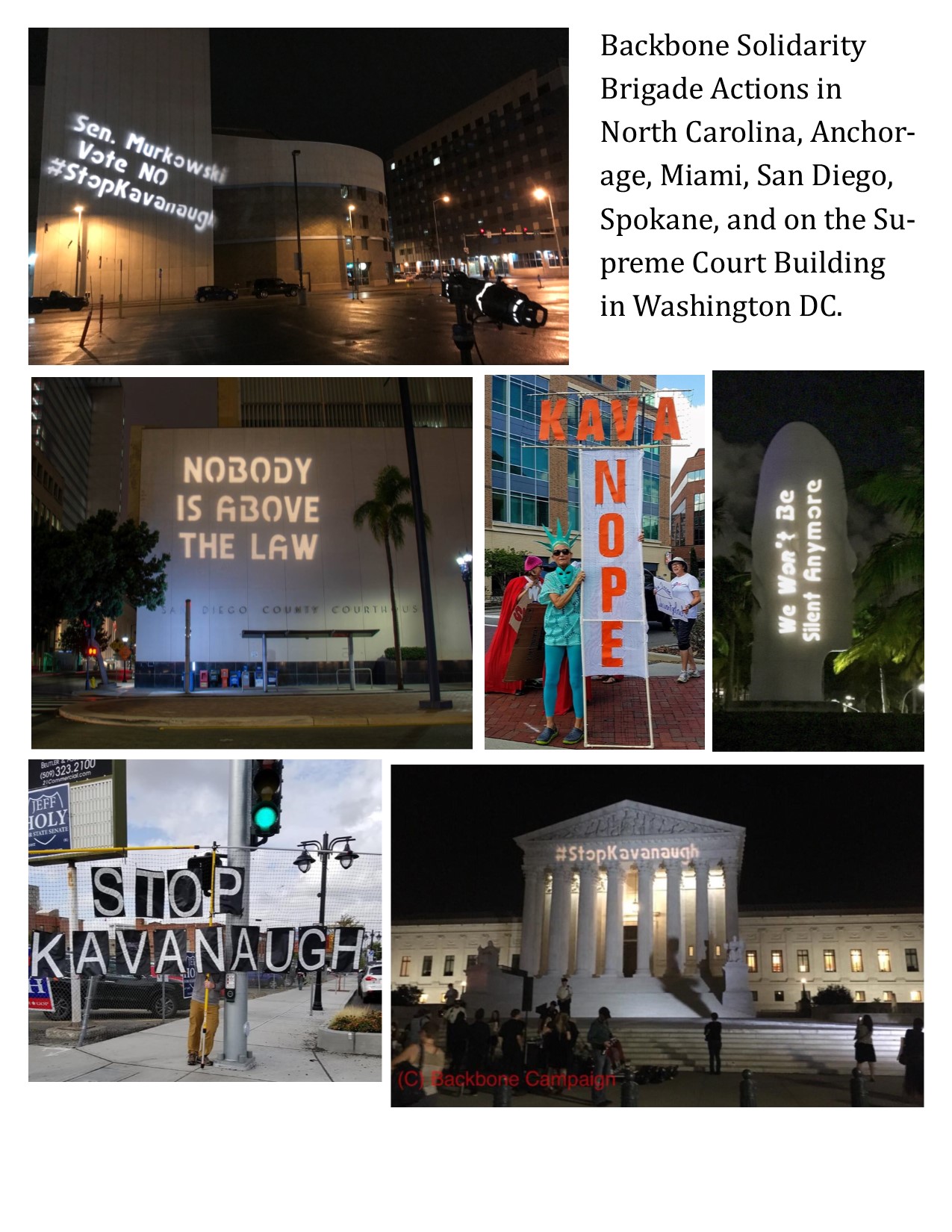 Teams with lights and props are now active in 27 cities across the US! Backbone HQ provides them with tools to creatively get their message out -- for national causes like stopping the Kavanaugh nomination to local issues like ending houselessness and stopping a pipeline.

Will you help get this gear into the hands of more activists who hunger to take action?

Bill found eight of the lights we use on sale and we'd like to purchase them so folks in another eight cities can do light projection and get messages from their community out to decision makers, the media and bystanders.

Pitch in here so we can get another 8 cities tooled up and ready to go!

City by city, we are building a nonviolent army of change agents that use artful activism to turn the tide!

We continue to throw down our creative resources for the campaign to save the Puget Sound Southern Resident orca and call for the removal of the Lower Snake River dams. To join in, please fill out this survey indicating the ways you'd like to take action. A human orca mural is taking place on Whidbey Island this weekend; contact us to bring this creative tool to your town, beach, park, or event!

Washington State Governor Jay Inslee's Southern Resident Orca Task Force just released a draft report and is accepting comments until Sunday, October 7.  To learn more and sign the petition created by our expert friends Save Our wild Salmon, calling for dam removal, go here.  Please do this right away, as all comments must be delivered by Sunday!

Celebrating the successes YOU made happen!

Backbone brought out a large team to the Free the Snake flotilla and welcomed the indigeous canoes on their journey to the flotilla with banners reading "Restore the Salmon" and "Save the Orca" and "Remove LSR Dams".

On the way out there, both the boat trailer and truck broke down, stranding Bill in Lewiston for several days.  Fortunately many donors generously contributed to cover the costs of the breakdown, and the truck, Sera, is now ready to travel! 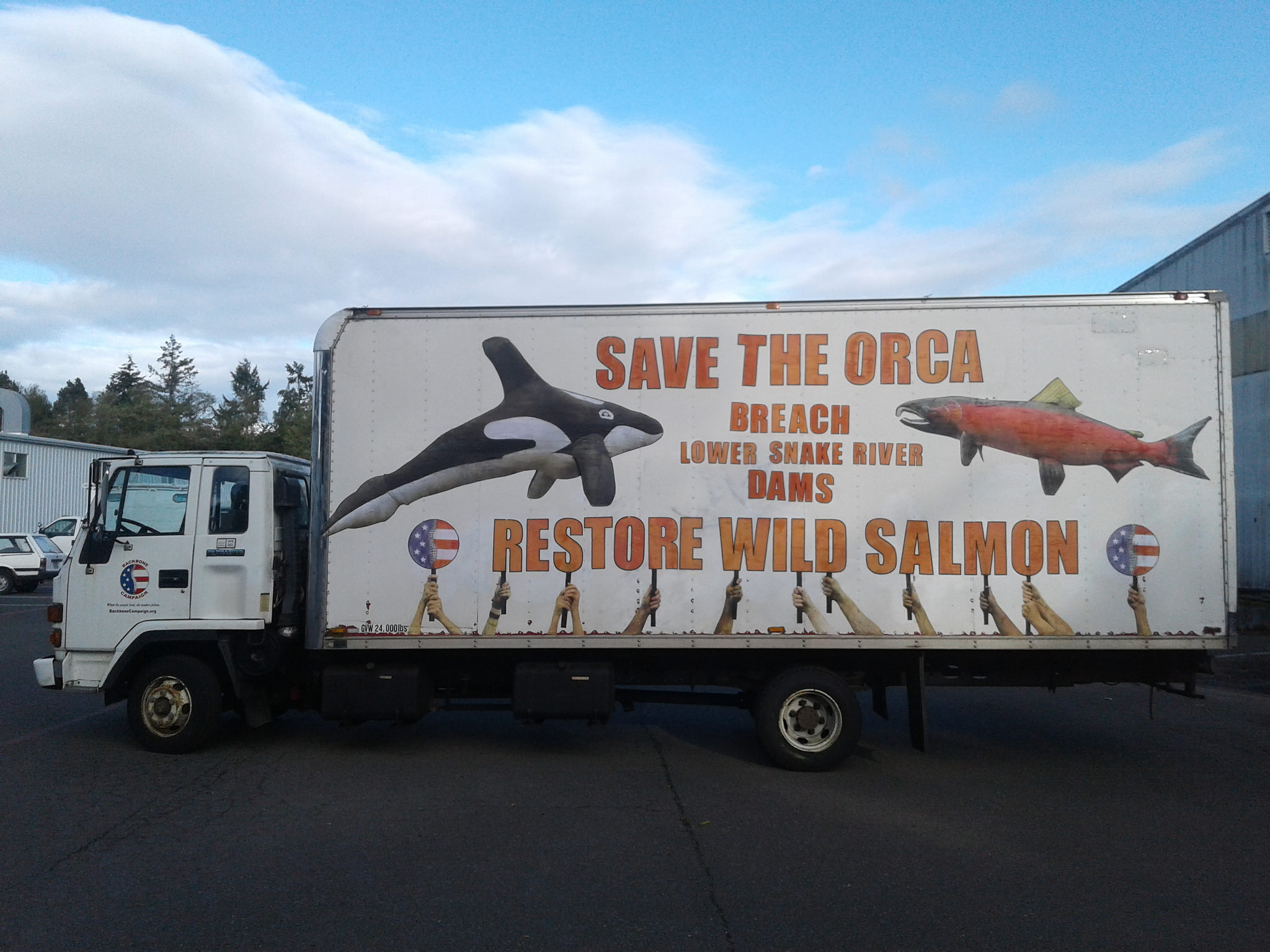 Members of our Solidarity Brigade network came together for four days of learning, skilling up, and creating art.  In addition to hikes to watch spawning salmon and learn about native plants, our team was inspired by Jim Diers' talk on community organizing, Mary Lou Finley's presentation on the Movement Action Plan, and Alessandra Mondolfi's artful activism, AND we got some more training in anti-oppression, deepened our strategy for the orca-salmon campaign, and much more.  It was a time for strengthening our connections with one another, sharing ideas and learning, refocusing our work, and getting energized for the long road ahead.  Thank you to everyone who attended, participated, pitched in and helped make it a success!

This week Bill and Roni took our giant box truck to Spokane to deliver a Pop Up Artful Activism training, ending with an epic light projection on a downtown building.  The next day, they deployed the Diaper Donald balloon, riding a Trident missile, to greet VP Pence who was visiting the city. 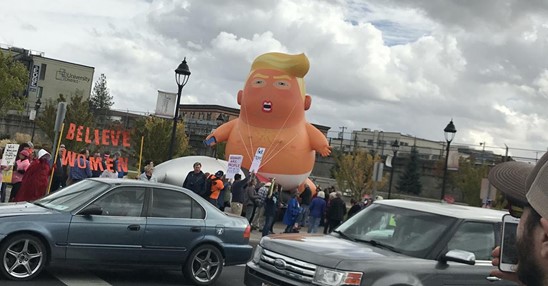 "The Trump Baby was one of two internationally famous political figures who visited us on Tuesday, and it did just what it was meant to do: parody the demeanor and behavior of the president; attract cameras by the score; serve as ground zero for lefty protests against the visit from Vice President Mike Pence ... and give activists a chance to meet, have fun and raise their voices as Americans...." --Shawn Vestal Spokesman Review

The two days of action were a resounding success, with many folks galvanized and inspired by the fun imagery and participatory tools.  Thanks for hosting us, Indivisible Spokane and the Unitarian Universalist Church!

After a day of rest, they drove the truck and gear down to Portland for a training with folks working on saving the orca.  Newly skilled folks did light projections, bannering over freeways and then deployed imagery at a rally at the Agencies that oversee dam operations. (As local organizer Michelle Seidelman said, we just need to remove the earthen berms, no explosions are necessary for the river to be restored and the salmon to be able to safely pass - as adults to their spawning grounds and as juveniles to the estuaries.)

Want to pitch in so more folks can get trained?  We'll be sending our spiffed up biodiesel-running truck to communities that want training in lights, banners and other gear.  Make a tax deductible donation here so we can take this effective and engaging training on the road! 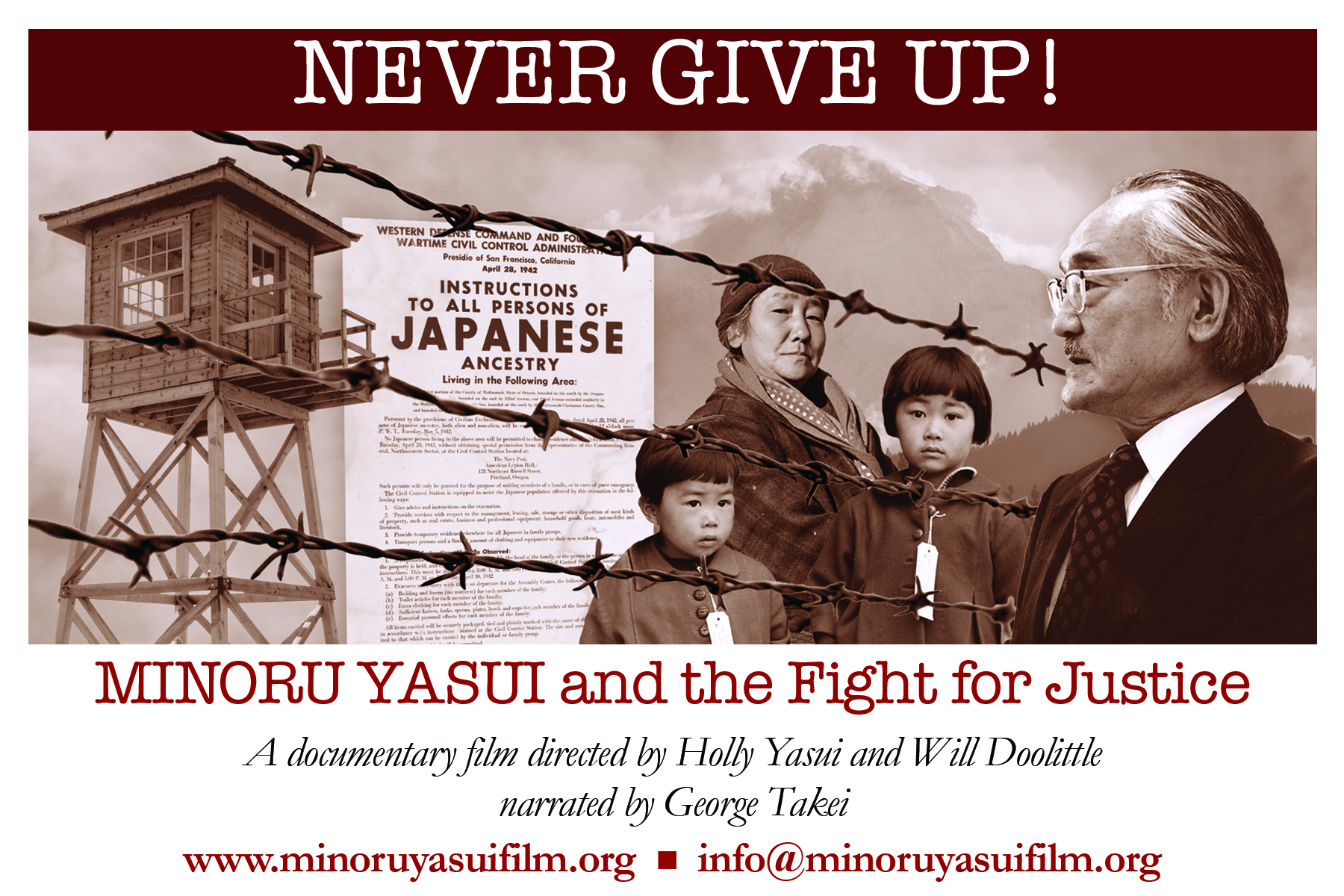 Locally on Vashon, join us for Backbone Meaningful Movies on the second Tuesday of the month. This month's film, showing 10/09 at Vashon Theatre at 6pm, is "Never Give Up," about civil rights lawyer Minoru Yasui, who challenged the order to remove citizens of Japanese descent during WWII into Internment Camps. The filmmaker Holly Yasui will be at the screening to talk about her father; she wants to connect with educators everywhere who can bring the film and its curriculum about the Japanese internment to classrooms. Can't make the screening on Vashon this Tuesday? Learn more and get contact info at www.minoruyasuifilm.org

The next OTF meeting to determine orca recovery measures will be October 17-18 in Tacoma, location to be announced.  Sign up at backbonecampaign.org/orca to indicate your interest in lining freeways with banners that morning in support of dam removal and deploying imagery and signs outside the meeting. See Governor Inslee's OTF webpage for more info, and check out Save Our wild Salmon's strategy for seizing this critical important to actually make a difference in this decades long fight to restore the chinook salmon so the Southern Residents have the food they need.

UU Justice Summit happens at Edmonds UU Congregation, Saturday, October 20th.  Backbone is excited to be a co-sponsor and participate in this innovative gathering. Invest a day to evolve our individual and collective justice work; create connections, craft strategy for legislation and action, and share "what works" with others deeply engaged in social and environmental justice advocacy; and participate in the launch of a new, statewide action network, JUUstice Washington. The summit brochure is here.

Our future depends on 'we the people' building the biggest movement this country has ever seen.

By pitching in here, you can create more actions that build people power!

If you're excited about this kind of artful activism and want more actions, pitch in what you can here. We're all in this together and YOU can make sure more creative tools get into the hands of activists around the country.

Join the Lumbar Club by signing up for a monthly donation to Backbone -  donors like you contribute anywhere from $5/month to $200/month!  Whatever amount fits into your budget will be used to get training and more lights, banners, and GOBOs into the hands of change agents everywhere.

Let's transform crisis into opportunity and despair into hope by taking action to protect what we love. And action by action, we'll build the world we aspire to create.