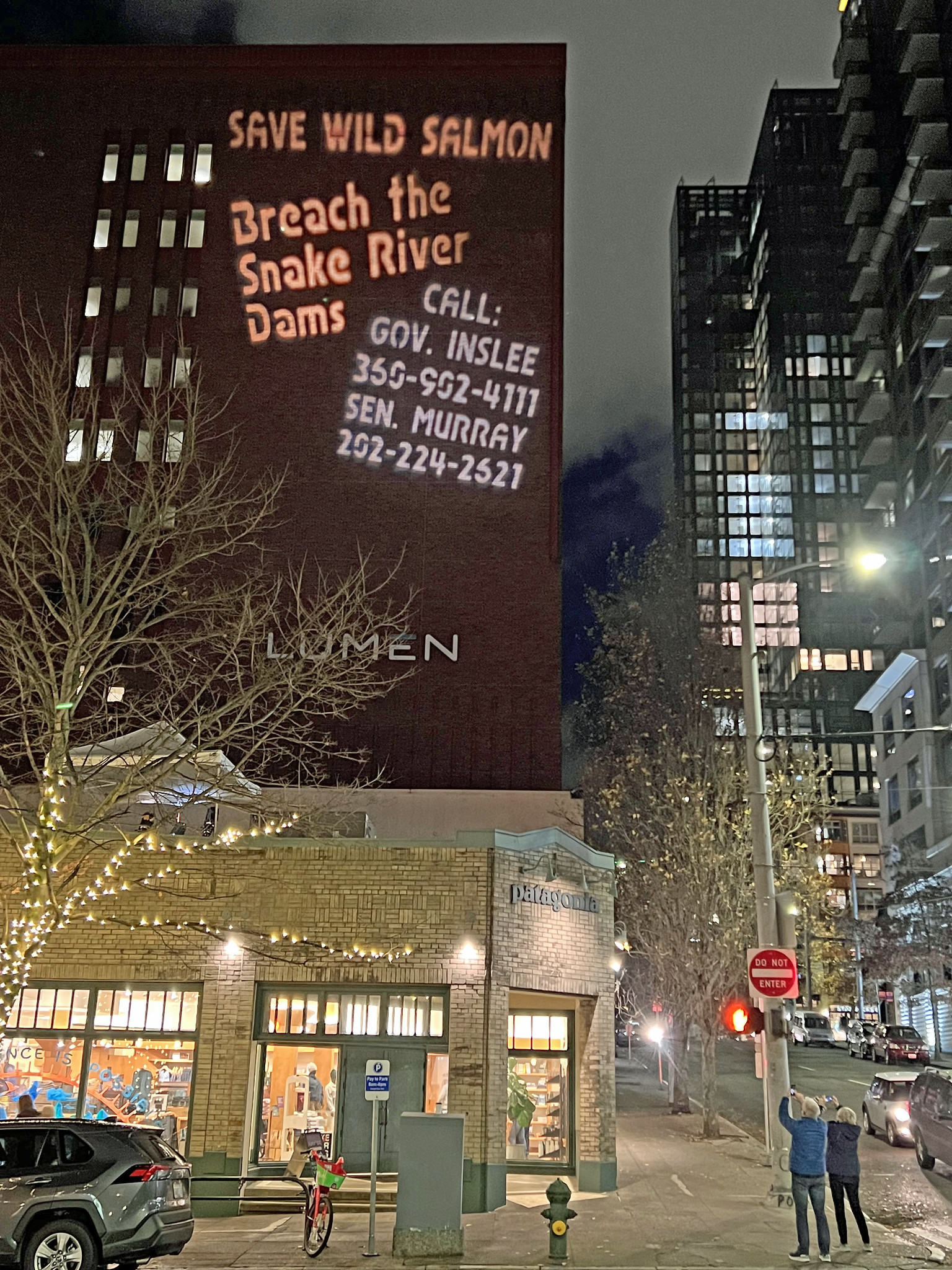 Beginning on November 15th and running through November 30th, Patagonia Seattle, Backbone Campaign, and Save Our Wild Salmon Coalition will collaborate on a light projection to highlight the 30- year anniversary of the Snake River sockeye salmon being designated as an endangered species under the Endangered Species Act. This was the first salmon population in the United States to be listed as “endangered.” Today, all four populations of the Snake River salmon and steelhead face extinction, and a total of 13 populations in the Columbia Basin have been listed as “threatened” or “endangered.”

After three decades, six inadequate, illegal federal plans, and many billions of dollars, these fish still swim on the brink of extinction. This year, just four adult Snake River sockeye salmon survived to swim into their spawning grounds in the Stanley Basin in central Idaho- after struggling past eight dams and eight warm, stagnant reservoirs downstream.

This light projection and related public educational activities highlight the urgent plight of Snake River Salmon and call upon Governor Inslee, Senator Murray, and other public officials in Washington State to act swiftly to develop and deliver a comprehensive regional plan that includes the removal of the four lower Snake River dams before we lose salmon- and the many benefits they bring- forever.

On November 15th, the projection will ask our local community to take action by calling Governor Inslee and Senator Murray’s offices to thank them for their recent commitment to develop a plan to protect Snake River salmon and ask them to, “Save Wild Salmon/Breach the Snake River Dams.” The light projection will run through November 23rd in downtown Seattle.

Throughout the week (November 15th - November 23rd), Patagonia Seattle will host a number of nonprofit organizations to table at the store and talk to our community about the plight of endangered salmon populations, the urgent need to restore this river, and the opportunity today for replacing the dams’ services with feasible and affordable alternatives.

On November 20th, many conservation and community organizations will host a series of evening “Vigils for Endangered Snake River Salmon” across the Northwest- in Spokane, Bellingham, Portland, Vancouver, Ketchum, and Boise to similarly recognize this important anniversary, and the urgency for action and leadership by our state and region’s public officials.

Patagonia Seattle is honored to collaborate with our Northwest partners to co-host this light projection in order to raise awareness, encourage community involvement, support the emerging political leadership and to call for urgent action. We urge our public officials to address this regional crisis in a manner that protects salmon, orcas, upholds our nation’s promises to Northwest Tribes, and invests in our fishing and farming communities.