Because of the many ways you take action and support this creative, solutionary work, Backbone has had a jam packed spring and there is lots to share.

Solutionary Rail for a Just Transition

Solutionary Rail is about using existing US railroads to get our society “on track” for clean transportation and renewable energy. We feel it may be the best chance we have for significantly curbing carbon emissions and ushering in a just and sustainable future. 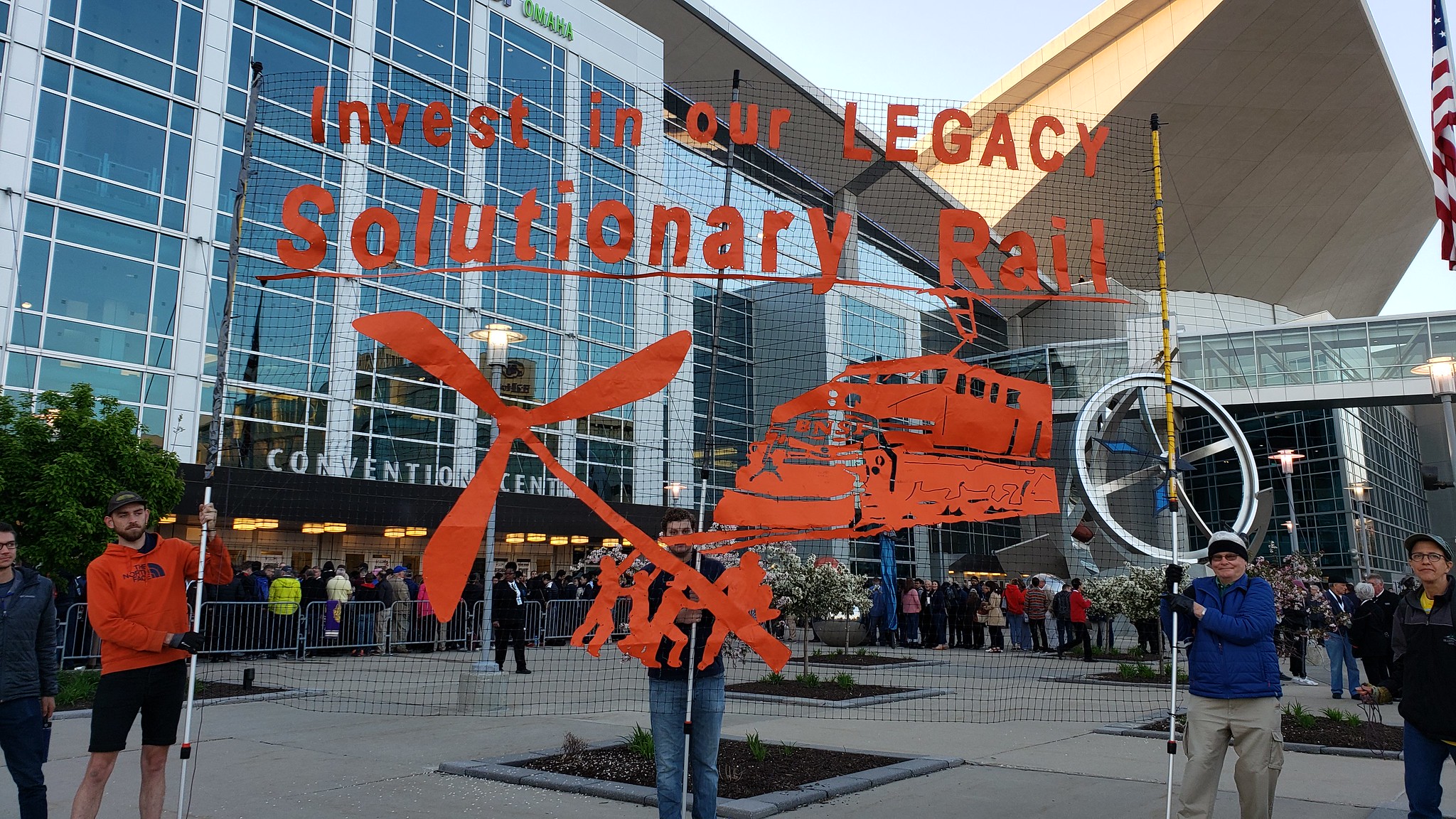 Bill asked if the Solutionary Rail team could meet with them to discuss our proposal for a public-private partnership to electrify their railroads and open corridors for a clean energy future. Mr. Buffett’s reply was evasive and rambling, but he did say that we were “free to speak with Carl Ice,” the new head of BNSF. Then, Buffett’s partner Charlie Munger chimed in. Gloriously, Mr. Munger stated that, “The questioner is on the side of the angels. Electrification is bound to happen sooner or later… I think Greg will decide when.”

WOW! We couldn’t have imagined better words of blessing. The “Greg” Mr. Munger referred to is Greg Abel, President and CEO of Berkshire Hathaway Energy and a likely successor to lead Berkshire Hathaway. We are working with our volunteer team of organizers and technicians to strategically follow up on Buffett's invitation.

Learn more about Solutionary Rail by watching this 3 minute video.

The tracks of this project are:

How might you fit into this work? Our next Solutionary Rail Organizing Call is Friday, June 7th, noon (pacific)/3pm (eastern).  To join the Volunteer Team that is working on these fronts to get Solutionary Rail implemented, RSVP HERE or send an email to [email protected] and let us know how you can contribute your time and talents! 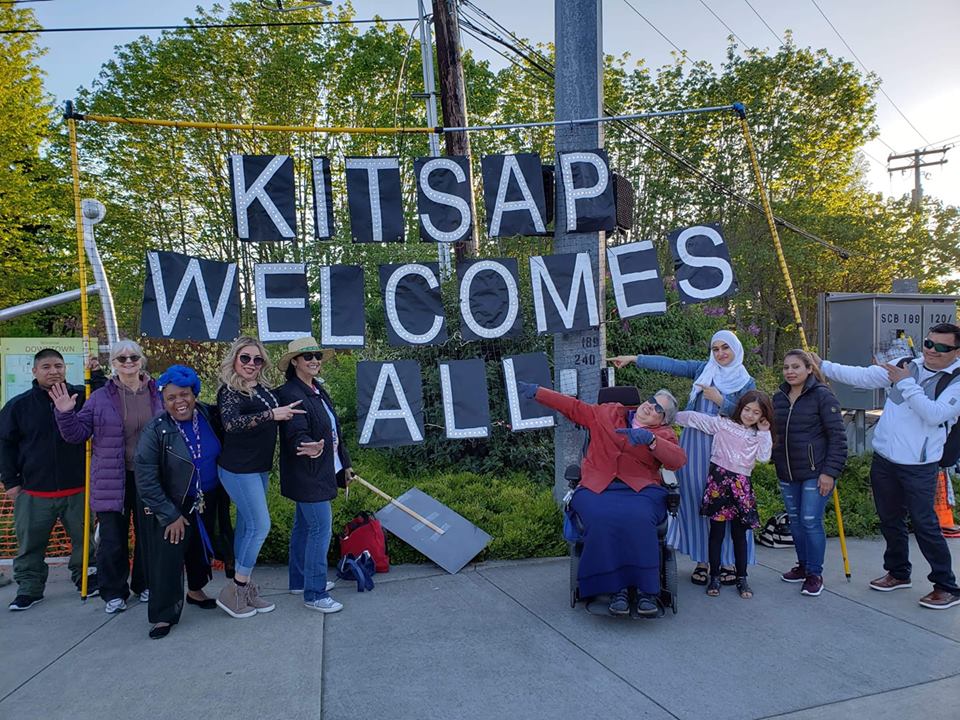 Backbone now has lights and gear in 33 cities! Join our next Solidarity Brigade Network Call to hear about actions in your area, Thursday, June 20th, 5pm (pacific)/8pm (eastern)

We recently trained up the Kitsap Solidarity Brigade and they quickly organized a three point action - light projection on one end of the county, an LED banner on another end, and a freeway banner at another entrance, all during the evening commute.

Next month we'll be training a new crew in Philadelphia - contact Phil if you're in the area and want to attend, the evening of June 25th.

Our Builder's Guild meets each Wednesday in our Vashon Island Warehouse to build props, assemble LED light panels and banners, and prep imagery to be shared across the US.  Currently, the Team is working on a kaleidoscope of monarch butterflies to show solidarity with immigrants, and a life size inflatable of Orca Mother Tahlequah and her calf. If you're in the area, stop by any Wednesday, 11-6.  Shoot us an email for directions - [email protected].  No skills necessary!  We have snacks available.  The third Wednesday of the month we hold a Volunteer Appreciation Dinner so we'd be honored if you join us Wed, June 19th at 5:30.

Backbone props are used just about every day in some part of the country. Whether it's to bring attention to the urgent need to shut down the child prison in Homestead Florida or light projection on the Venezuelan Embassy in DC to protect it from a State Dept coup, or activists in Houston working to keep their communities safe from toxic explosions, Backbone is happy to deploy our light projectionists or lend gear to protect what you love. Click HERE to see some of our Spring actions. Borrow an image or LED banner by reserving one HERE.

Save Orca and Wild Salmon by Restoring the Lower Snake River

In collaboration with our allies, we recently executed our 11th Human Orca Mural. We may be on the verge of another victory: after 9 months of actions to save the endangered Southern Resident Orca by restoring wild Chinook salmon, another milestone was reached. Last month, the Washington State Legislature approved $750k for a Stakeholder process on breaching the four lower Snake River dams. Breaching those dams would be the most politically difficult but single most important step toward preventing the orcas’ otherwise inevitable extinction. Together, we are making a difference on things of ultimate importance.

Let's keep the pressure building on policymakers and tell them extinction is not an option - they need to do everything in their power to protect orca and wild salmon!

Join Backbone at one of these upcoming events in Washington State: 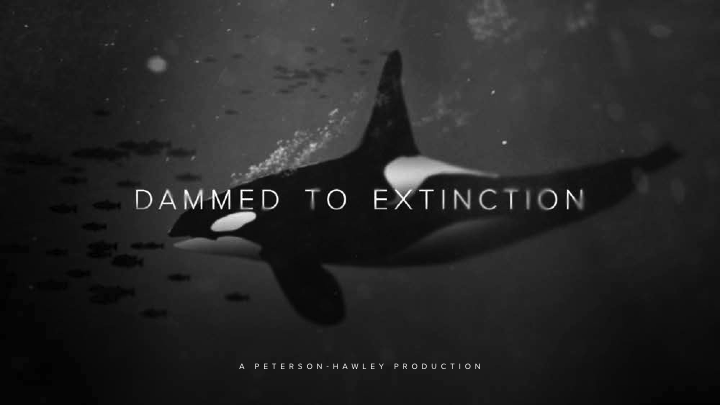 Backbone Campaign is honored to co-host two screenings of the highly anticipated Dammed to Extinction - in Seattle this Friday and on Vashon Island next Tuesday.

We are also co-sponsoring two more Human Orca Murals next weekend, bringing our total of Human Murals up to 13 since Tahlequah carried her deceased baby across the Salish Sea, so we would witness what is happening to the Southern Resident pod and the dire conditions of their habitat.  If you'll be in Gig Harbor or Bainbridge Island this Saturday, show up in black and stand up for the orca!  Info is at the links below.

About the Film: Directed by eastern Washington native Michael Peterson, "Dammed to Extinction" chronicles the plight of the endangered Southern Resident orcas who depend on Chinook salmon for food, including Columbia Basin salmon runs especially in winter/spring.

The film features interviews with scientists and experts across the Northwest, from the Salish Sea to the mountain rivers of Idaho, who make the case for removing four aging dams on the lower Snake River to bring back many thousands of chinook salmon to thousands of miles of pristine rivers in the Snake River basin, providing much-needed food for orcas. Currently, all runs of Snake River salmon and steelhead are listed as threatened and endangered. This year's adult returns are predicted to be the lowest in decades.

Film maker Michael Peterson grew up in Tri-Cities. After a career in Hollywood working on big-budget films including Independence Day, Armageddon, and Contact, he returned to the Northwest, buying property on the reservoir behind Condit Dam on the White Salmon River. Initially opposed to the removal of Condit dam, his views changed after witnessing the rebirth of the river and return of salmon and steelhead. Likewise, his views of restoring the lower Snake River and its salmon changed after learning more about the science and economics of its four dams and the urgent plight of the Southern Resident orcas.

Be part of something BIG!

All welcome to stand up and show your love for the orca and wild salmon!  Wear black or bring a black umbrella.

Washington State - No Consent, No Construction! 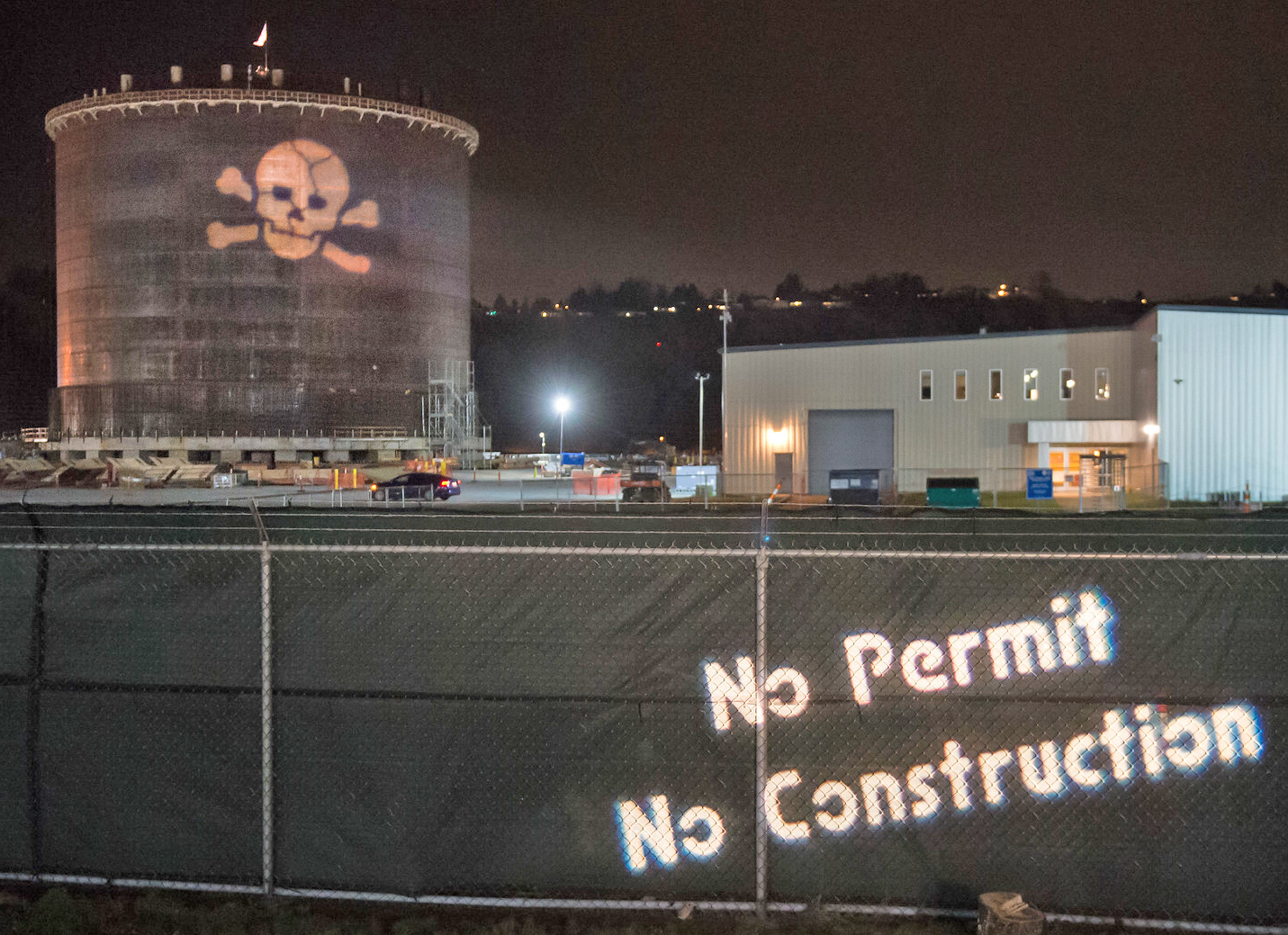 Puget Sound Energy is currently building a Liquefied "Natural" Gas (LNG) facility in the Port of Tacoma, Washington. Once thought of as a "bridge fuel", LNG is actually climate-destroying fracked gas. PSE's facility is being built illegally upon Puyallup Tribal land, without their consultation or consent - and in direct violation of the Medicine Creek Treaty of 1854.

It is past time to shut down Homestead, a prison-like facility where 2,300 children are being held, in violation of the Flores Settlement Agreement and in service of profiteers and owners of Calliburn, including John Kelly, Trump's recently retired Chief of Staff. Taxpayers are paying $750/child/night to Calliburn; the corporation has no incentive to place children with family or in a small group home.

Actions are happening next week - find one near you HERE.

On Facebook? Search for and request to Join the group "Witness: Tornillo Target: Homestead" to stay informed and read accounts by witnesses.

Backbone just sent out our mid-year fundraising letter.  If you received it and would like to contribute online, a link to make a recurring monthly donation is HERE; a link to make a one-time gift is HERE.

To dedicate your gift to Solutionary Rail, click HERE. If you didn't receive a letter (yet), you can read it HERE.

Thank you for being part of this important activism - we couldn't do all this without you! 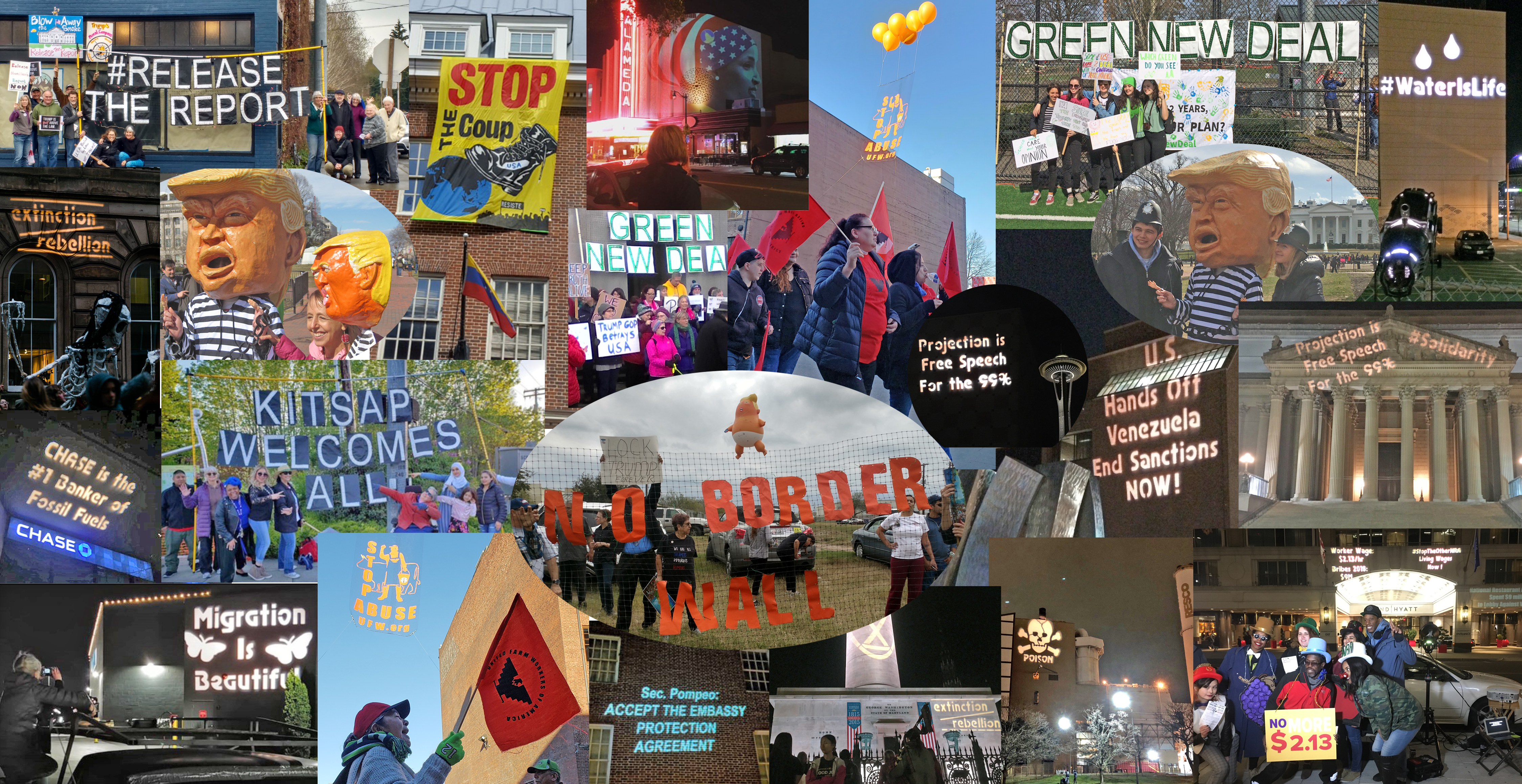