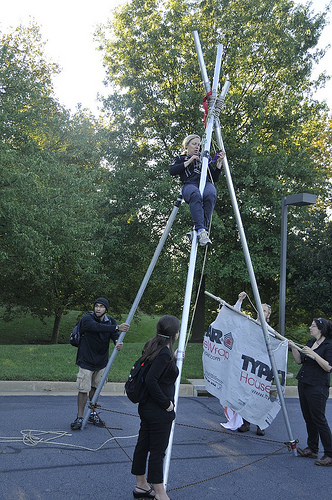 Tripods are an awe-inspiring tactic that can effectively communicate your message demanding attention to your campaign. Moreover, tripods can blockade or prevent access to a location even potentially delaying or stopping some form of destruction. Tripods were first used by indigenous peoples and have since been adapted for use both in rural forest defense and in urban settings. Whether you want to stop a clear-cut, halt construction of a tar sands pipeline, or lock down a transnational corporation or complicit regulatory agency, tripods can deliver a major victory for you and a stunning blow to your opposition.

Tripods require a well functioning affinity group and some advanced planning, and depending upon the situation and with enough training can be implemented by about anyone. Tripods function best by intentionally leveraging the spotlight in order to secure the safety of the person/persons at the top of the tripod.

Backbone Campaign trained and provided guidance to activists in Virginia who utilized just a banner and a single tripod to block 5 lanes of traffic, thereby preventing access to the meeting location of the Trans Pacific Partnership in September of 2012. The action was so successful that they were able to negotiate the de-arrest of a team member in exchange for finally removing the tripod, no one was arrested. The fight continues...

Want to HOST or ATTEND this workshop offering? Fill out the quick form below.