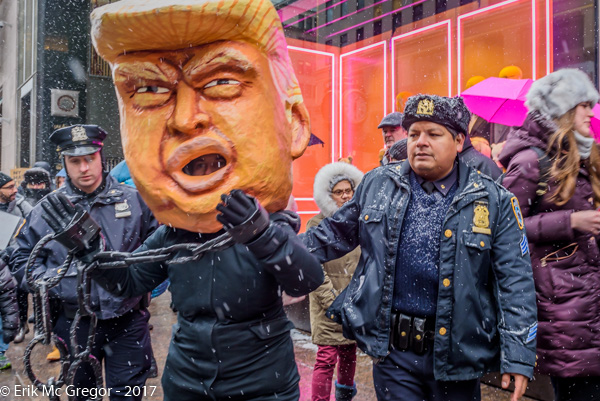 This afternoon, dozens of activists gathered in midtown Manhattan to demand the United States impeach and remove President Donald Trump and set a national standard for leadership and accountability. They are acting on account of twelve points of Trump’s impeachable offenses:

Seattle-based organization, Backbone Campaign, teamed up with several New York City based advocacy groups for the action. The event marks a kickoff to a larger nationwide tour of the centerpiece of this action: A giant Donald Trump hand-sculpted puppet head that taunts the crowd and eventually ends up in a large-scale “Citizen’s Arrest of Donald Trump”.

A group of people gathered at Central Park SE to take pictures with the Trump head along with their messages to be tweeted “@” the President since this seems to be how he prefers to communicate with the country.  The crowd pursued him chanting “Lock him up!” fended off by his “police escorts”.  At Trump Tower one of the children participating enacted the arrest by slapping cuffs on Trump.  The NYPD promptly escorted “arrested Trump” away from Trump Tower.

“This is to build momentum around the impeachment movement around the country. The positive feedback from everyone that was involved today, let us know this is something that the people support and are hungry for. We are looking forward to continuing this action in multiple cities across the USA”, states Phil Ateto, the Solidarity Brigade Coordinator for Backbone Campaign.

Local IT Program Manager and Radical Videographer, Owen Crowley, expresses his reasons for showing up today, “I came to demonstrate that sovereignty derives from the people. Mueller will not save us. We need to save Mueller, because he can only be effective when the people govern and the institutions of government are strong.”

Bill Moyer, the Backbone Campaign’s  Executive Director and co-founder said of the overall action, “Humor and ridicule of tyrants is a timeless tradition we are proud to be part of.  Our grave concerns mount as the stage is being set for the Predator-in-Chief Donald Trump to fire Special Counsel Robert Mueller. Trump’s profane buffoonery and criminal incompetence are an insult to rights and protections people have fought and died for abroad and at home in the social movements that have improved our society. Backbone Campaign is resolved to stand with our allies across the country in staunch defense of the shared aspiration for a real and just democracy -  and -  in principled, courageous resistance to the nightmare of dictatorship that Trump’s demagoguery is leading our country toward.”

Citizen’s Arrest Actions are scheduled for Los Angeles, Boston, DC, San Diego, and many other cities, joining in with the effort to Impeach! Indict! and Imprison! Donald Trump.  More information about the Citizens with Backbone project can be found at BackboneCampaign.org/trump

If you share our New Year's resolution to see Trump impeached, help build momentum for that aspiration HERE.

Many more photos of this action by Erik McGregor on Flickr. 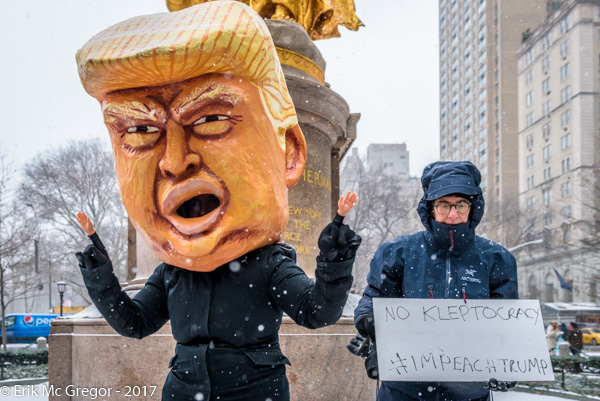 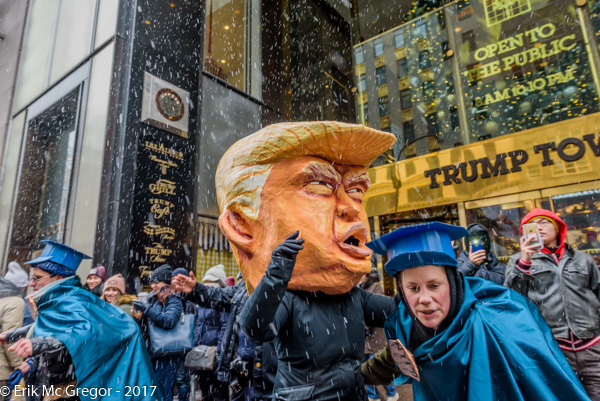 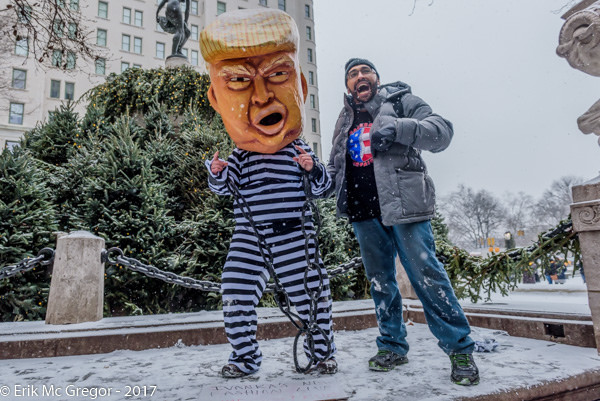