This project was supported, in part, by an award from 4Culture.

Rally at City Hall, then march to the Federal Building (5 blocks downhill) to deliver our message, (we might also pay a visit to the Chambers of Commerce). 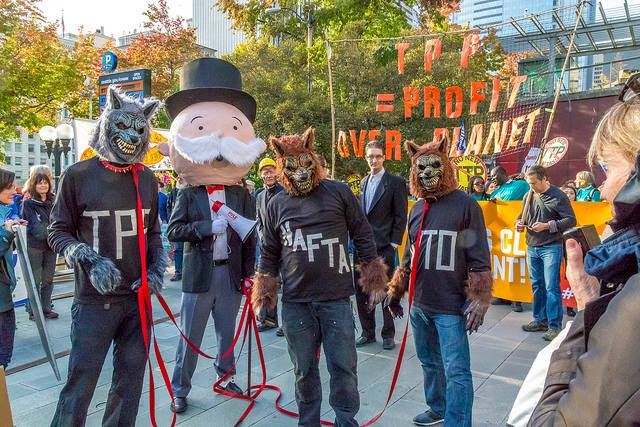 On February 3, (February 4th in New Zealand), head trade negotiators from 12 countries around the Pacific Rim will gather to sign the biggest corporate trade agreement ever brokered: the Trans-Pacific Partnership (TPP). All over the world, from Malaysia to Mexico to Seattle, they will be met with protest.

We are tired of corporate interests stealing our jobs, ruining our environment, and undermining our health and security. Now, the decision rests with US Congress -- accept this deal, or reject it and demand fair trade policy?

The Chambers of Commerce announced that they are "rolling up their sleeves" to pass TPP, so we are rolling up our sleeves to fight back. Join us to send a message here in Washington and to the world -- TPP = Betrayal.

Join 350 Seattle, WFTC (Washington Fair Trade Coalition) Backbone Campaign and many more coming together as a global uprising to #StoptheTPP!