Liberty is Muscle that Must Be Exercised

More than sixteen years of creative protest continually affirm that freedom has territorial boundaries. Those boundaries are human constructs, but they require proactive defense. Any retreat only emboldens tyrants and bullies who will never be satisfied. This lesson was embedded in me during the very first action with my artist friends from Vashon Island who later co-founded Backbone Campaign.
Like projectionist Robin Bell, people in Backbone's Solidarity Brigade network have recently experienced intimidation during both overpass bannering actions and light projections. Normal people cannot compete for space in the social dialogue if the ticket is at a price point affordable only to those who already have way too much power.
Money is not speech. Speech is speech. Backbone Campaign's work is about teaching people ways to harness their speech. We will fight to defend the territory of free speech, and we will win. 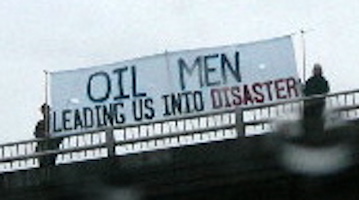 In early 2002, as the propaganda machine was going into full swing to justify invading Iraq, we created a largish banner (3'x10') that said simply "OIL MEN Leading US into DISASTER."  We deployed it without incident once. Then a couple of folks got hassled by police one Friday afternoon. At first refusing to give ID to Seattle Police, one of them got a ride to where he would be detained.  When there - realizing a judge may not be available until Monday - he identified himself and was released.  Without proper preparation, it was prudent not to force the issue.

That weekend we had an emergency meeting. We invited a lawyer friend to help us prepare to confront the police with better understanding of the law and a camera (before phones were cameras). In the very early morning hours, a sleepy artist left his video camera at home; we realized this while on the ferry.  All I could find for documentation - or the illusion of such - was a Walkman I found by rummaging through my chronically messy car. I had picked it up off the road a few weeks before. It had no batteries, no tape, and was only for playback and incapable of actually recording anything. I put it in my pocket - not entirely sure why or how I'd actually use it.

We deployed our banner.  We noticed the traffic cameras swivel to check us out. A Seattle police vehicle stopped by first.  As an officer approached, I pulled out a nonfunctioning walkman. I held it down at waist level in hope that it would make an impression but not be to obvious a bluff.  I looked the officer in the eye and clicked the button, pretending to record the interaction. The first said we should take it to a downtown park.  We disagreed, pointing out that we are reaching far more people at the overpass. The one squad car was followed by another. The second officer said we couldn't have a "large sign on an overpass."  He told us we could have small signs and walk back and forth with small signs...  I said something like, "really, there's a law that says we can walk back and forth with small signs but not stand still with a larger sign? Please show it to me." Our lawyer had prepped us, so I continued, "It's our understanding that the law actually only says that we cannot attach the banner to the overpass or drape anything over the overpass.  We have no intention to do either."  I suggested they contact the State Patrol since the overpasses are their jurisdiction. We had set down the banner for this discussion but did not dismantle it.

Then a State Patrol officer showed up - along with other patrol cars.  We were starting to get mentioned on the radio as a "police incident at the Yesler Overpass is distracting drivers and slowing traffic on I-5 North." This first State Patrol officer approached, book in hand reading laws about disorderly conduct and failure to comply.  I pointed out that we were being extremely polite, patient, and had actually set down the banner in order to resolve the disagreement. I told her, "I believe this is a First Amendment issue, so please contact the officer in charge."

Within a few minutes - maybe more as my sense of time and adrenaline were playing with each other as I continued to bluff with my non-functional walkman - the officer in charge arrived.  Now there were seven squad cars, marked and unmarked, SPD and WA State Patrol.  The officer in charge strutted toward us.  Without introduction he launched, "You believe this is a First Amendment Issue." I answered, "That's correct." He continued flatly, "You may not attach a banner to this overpass. You may not drape anything over the overpass" and then was silent.   After a few seconds passed and I realized that he was finished I said, "So if I understand you correctly, as long as we do not attach the banner to the overpass or drape it over the overpass, we can re-set up our banner and continue our action."  To which he responded, "That is correct."

The officers who'd been huddled around waiting for us to comply looked like scolded children.  They grumbled, did an about face and retreated to their squad cars. One muttered as he passed us that "there better not be an accident or you'll be liable..."  I put away the Walkman. After remaining surprisingly calm, my knees commenced to get a little shaky. Huddled with my friends, we agreed we should set up the banner again, at least for a little while.

We of course also wanted people to be safe, and we encourage folks who use this tactic to be mindful of road conditions and not create a distraction if it may pose a real hazard to drivers.  But in a world of distractions, LED billboards, and smartphones - even our much larger banners are the least of the dangers.  What is truly a danger is a world threatened by greedy tyrants who use any means to squelch dissent in order to maintain their stratospheric trajectory of concentrating wealth and power. Their wars on people and the plant dwarf any minimal threat of further distracting drivers.

The words that popped into my mind as we wrapped up the action and my body began to calm down were, "Rebellion is a muscle that needs to be exercised."  Rebellion and liberty are expressions of the same or at least inseparable impulses and capacities in the human spirit.  The only way to defend liberty is to harness our capacity for rebellion and exercise it in liberty's defense. 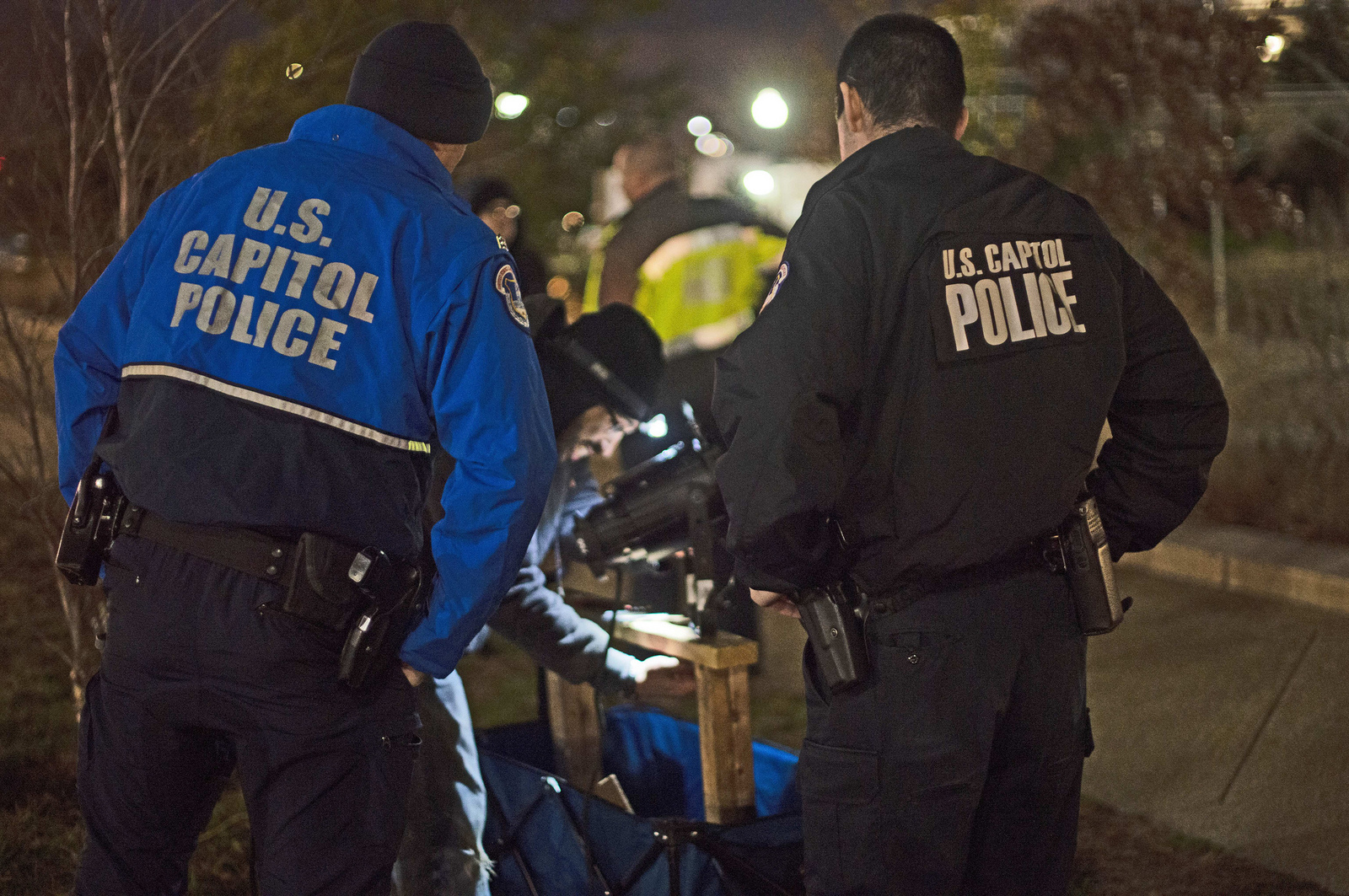 This photo shows Backbone Solidarity Brigade lead Phil Ateto exercising his freedom of speech at the Rayburn House Office Building in DC.  Non-commercial light projection is pure and protected speech. It harms no one - defaces nothing.  Trespassing with light is not a thing.  If it was, we'd be suing McDonald's for offending our retinas. So, if they want to take us on, we welcome that fight enthusiastically. Photo by Jody Coss
Spread the word.
Tweet