When We Fight, We Win!

It's been a full Spring and Summer, and we wanted to give you an update on what your support has meant.

Our biggest lean in this year (building on previous years' work) is on the campaign to restore the Snake River and stop the extinction of wild salmon and Southern Resident orca. As part of a grassroots coalition, we are working hard to let our policymakers feel the urgency of real salmon restoration, that is science based and that follows the lead of NW Tribes. 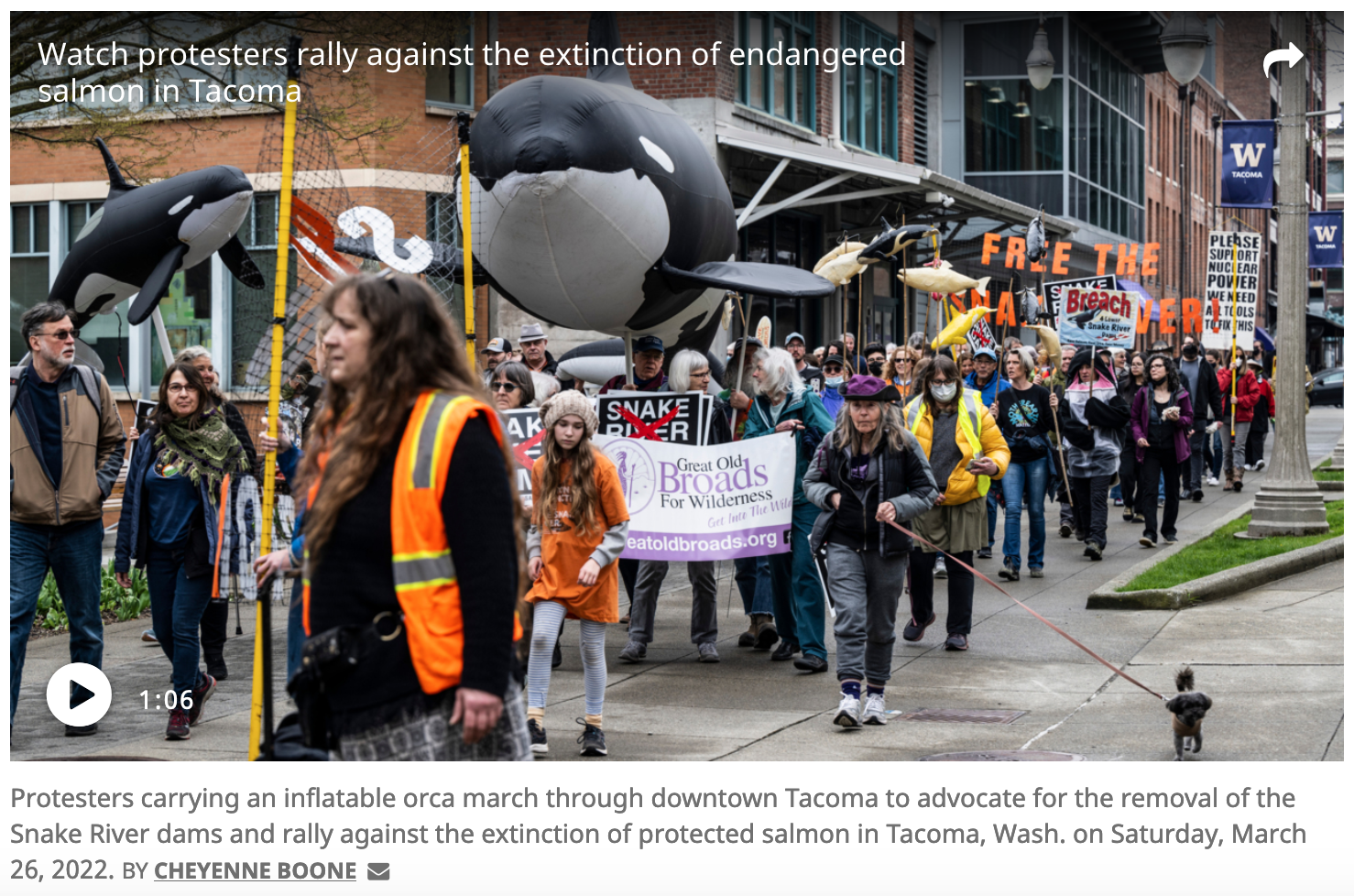 Our Solutionary Rail Project has been diving into the capacity for mode shifting grain off barges and onto rails.  We are very excited about this work and its potential to influence policy and rail capacity. Check out our research and the recent slide presentation, Lower Snake River Barge to Rail Research 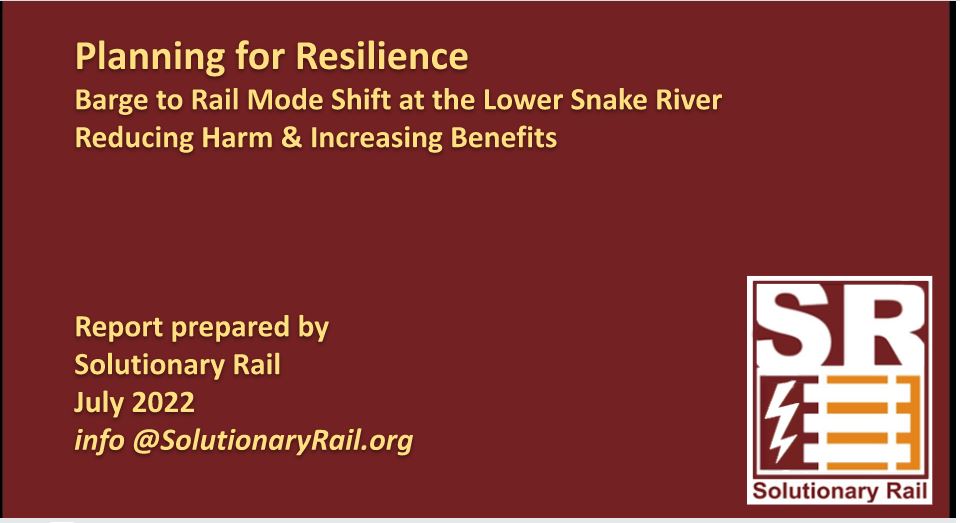 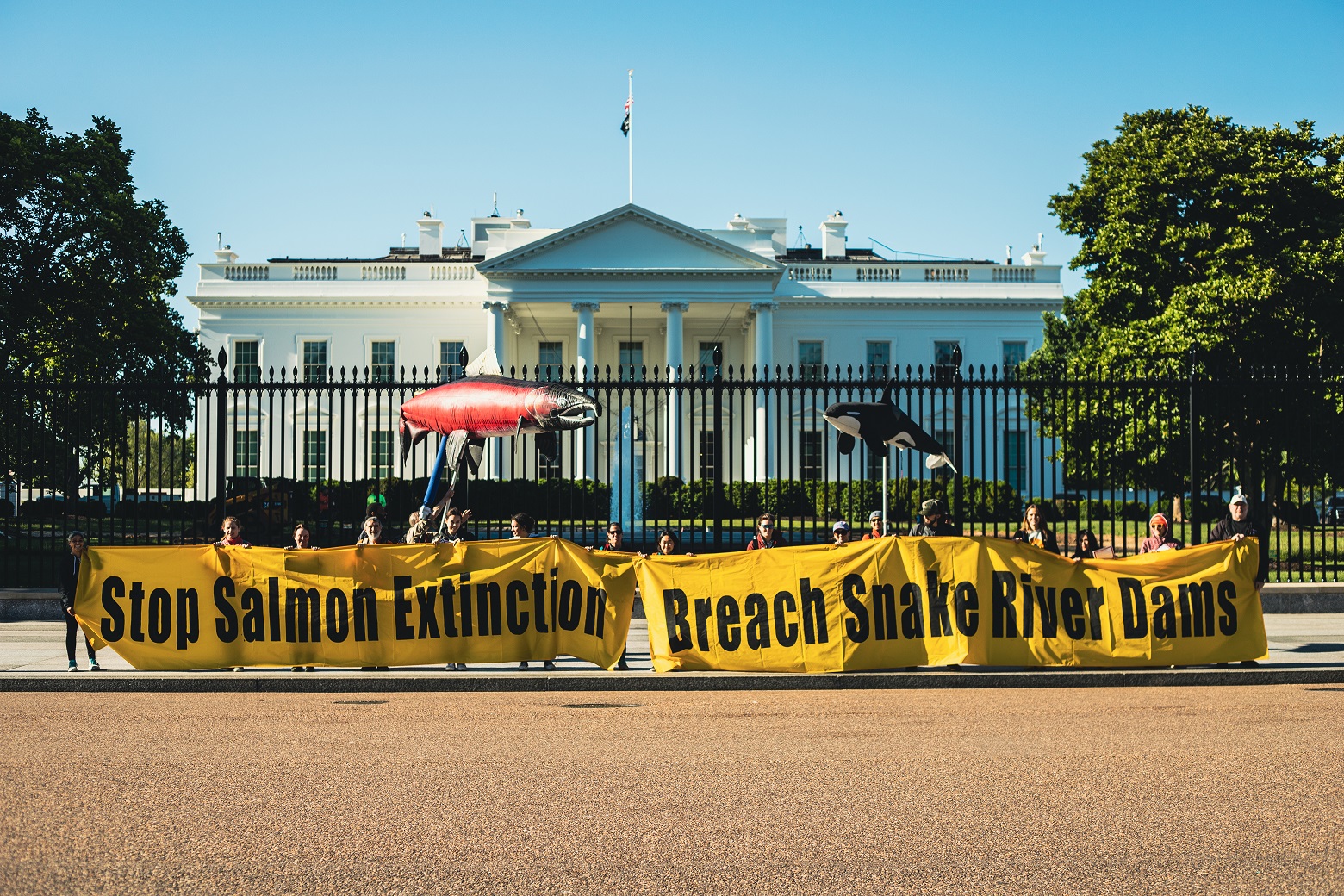 We also participated in the Nez Perce Tribe's Salmon Orca Summits 3 and 4. Bill was on a panel, speaking on Life After the Dams and last week was in DC with the props and banners, supporting the 4th Summit: 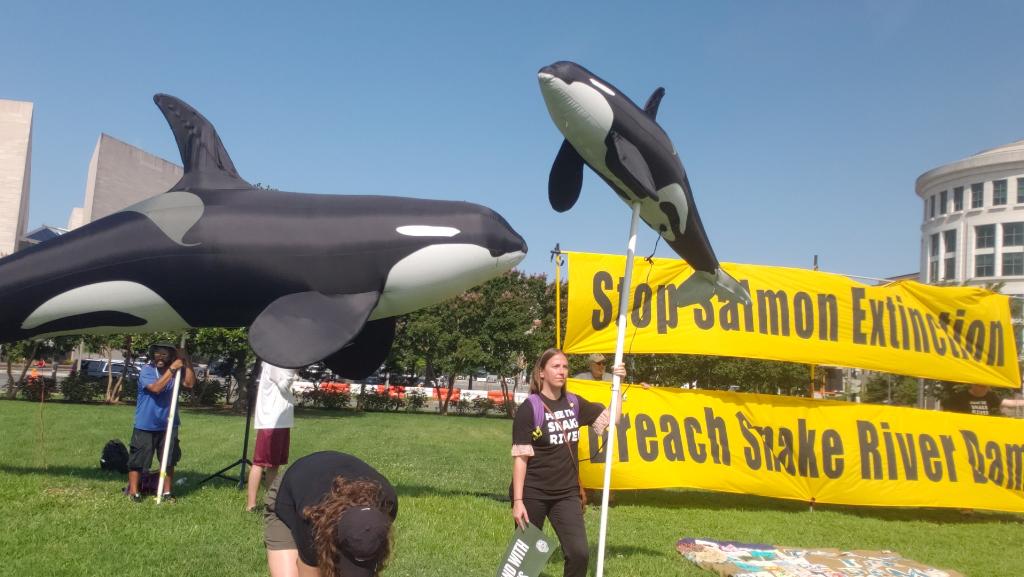 While Bill was in DC, Backbone organized banner deployments in 9 cities and towns on World Orca Day (July 14), to show our love for the Southern Resident orca, wild salmon, and a free flowing Snake River: 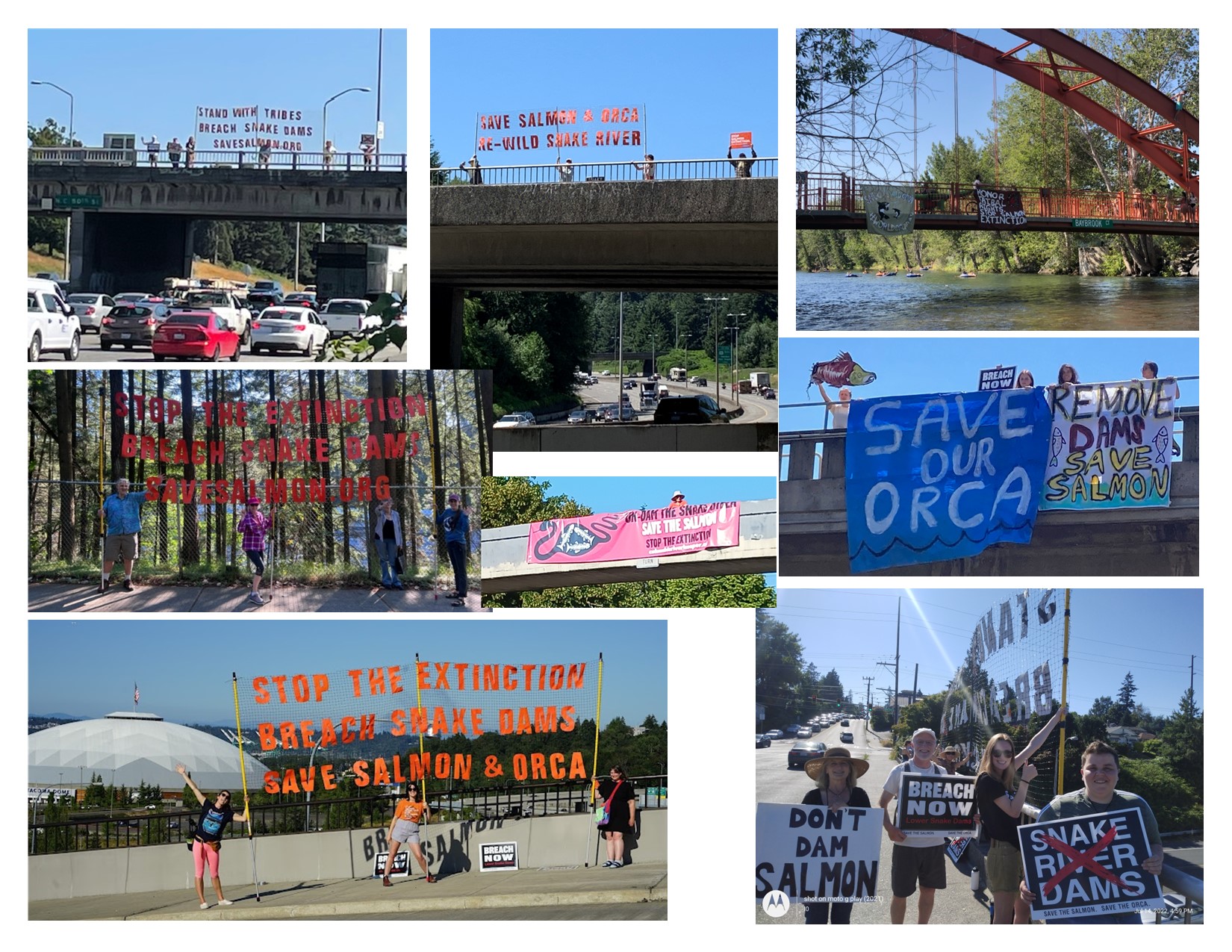 In just one hour, we reach 5-10k commuters! Contact us if you'd like to get set up with a banner, to mobilize in your community.

All this work is paying off - the Murray Inslee Final Report is expected to come out the end of this month, with recommendations that the dams be breached, so that the river will flow and salmon habitat will be finally restored. The dams, constructed in the 1950s-1960s, were a colossal mistake and it was anticipated they would render the incredible salmon species extinct, violating Treaty obligations the US has with NW Tribes.  The remaining species of the Snake River hover on the brink of extinction. But this is a resilient species; if the dams come out - aka are breached, hopefully by this winter - the salmon stand a good chance of returning to stable numbers.

Among so many escalating urgencies we face, this is one campaign where we can make a difference -  for orca, salmon and rivers, as well as for tribal sovereignty, clean energy, and economic resiliency.

While things are looking up, this fight is far from over.  We need your help to take this over the finish line.

Another recent highlight was teaching kayaktivism to environmental justice allies from across the country to prepare for a big action in LA. A couple weeks later, over 40 environmental justice organizers, members of the Moving Forward Network, took to the water to demand that the Biden Administration and global leaders in attendance for the Summit of the Americas hear a clear message from our communities: ¡Cero Emisiones Ahora! (Zero Emissions Now!) 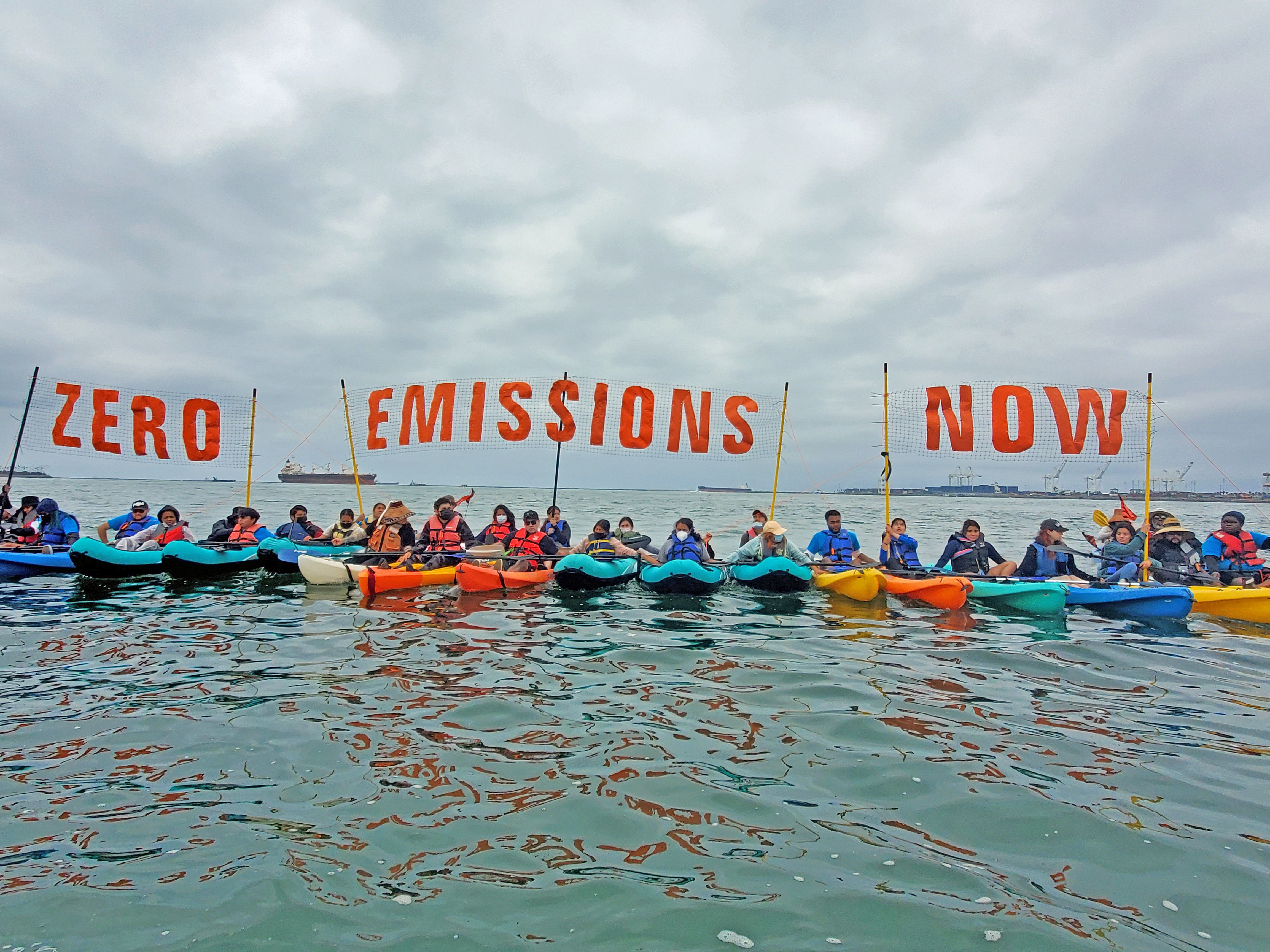 These Kayaktivists came from across the country to take to the water at the San Pedro Bay, near the Ports of LA. After forming a giant kayak raft, they raised banners and chanted in English and Spanish. The flotilla was followed by a bold deployment of a 120' floating banner with 8' letters inside terminal J.

This may be the first time in the US that a Kayak Flotilla was nearly 100% Black, Indigenous and People of Color (BIPOC), conquering the stereotype of majority white kayaktivism. The Long Beach action was preceded by a weekend kayaktivism training on Vashon Island in May, facilitated by Backbone Campaign. We at Backbone are extremely proud to have partnered with these brave Environmental Justice organizers and MFN to make this possible.

Last month, our "We The Corporations" prop was deployed in front of the Supreme Court, calling out Dark Money's influence on Justices and corruption. Common Dreams article HERE; NYT article HERE 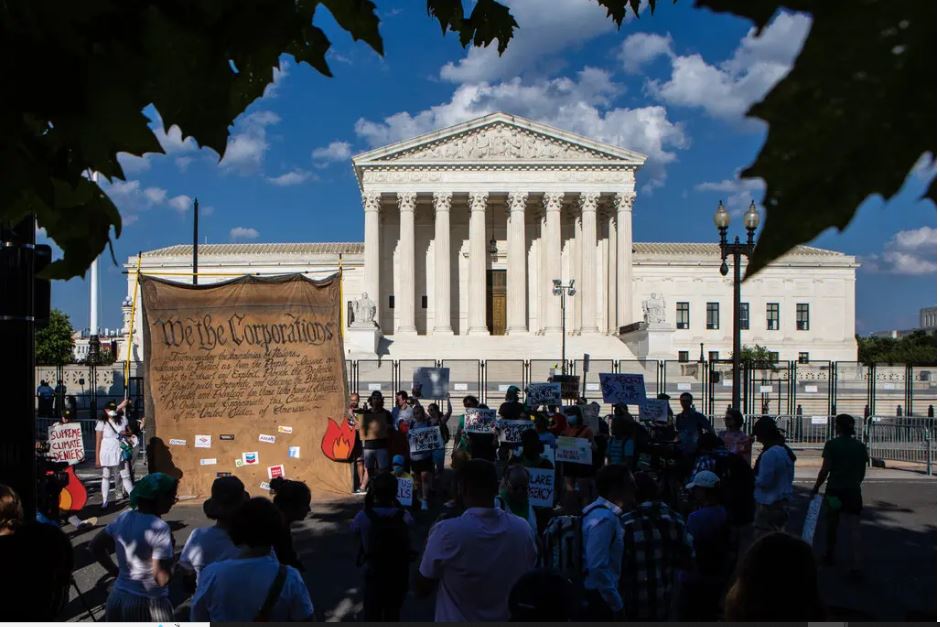 GOBOs are being shipped out today to projectionists in our Solidarity Brigade network to say Bans Off Our Bodies, Abort the Court, Expand SCOTUS, and more. Watch this page for updates!

A few other recent highlights: 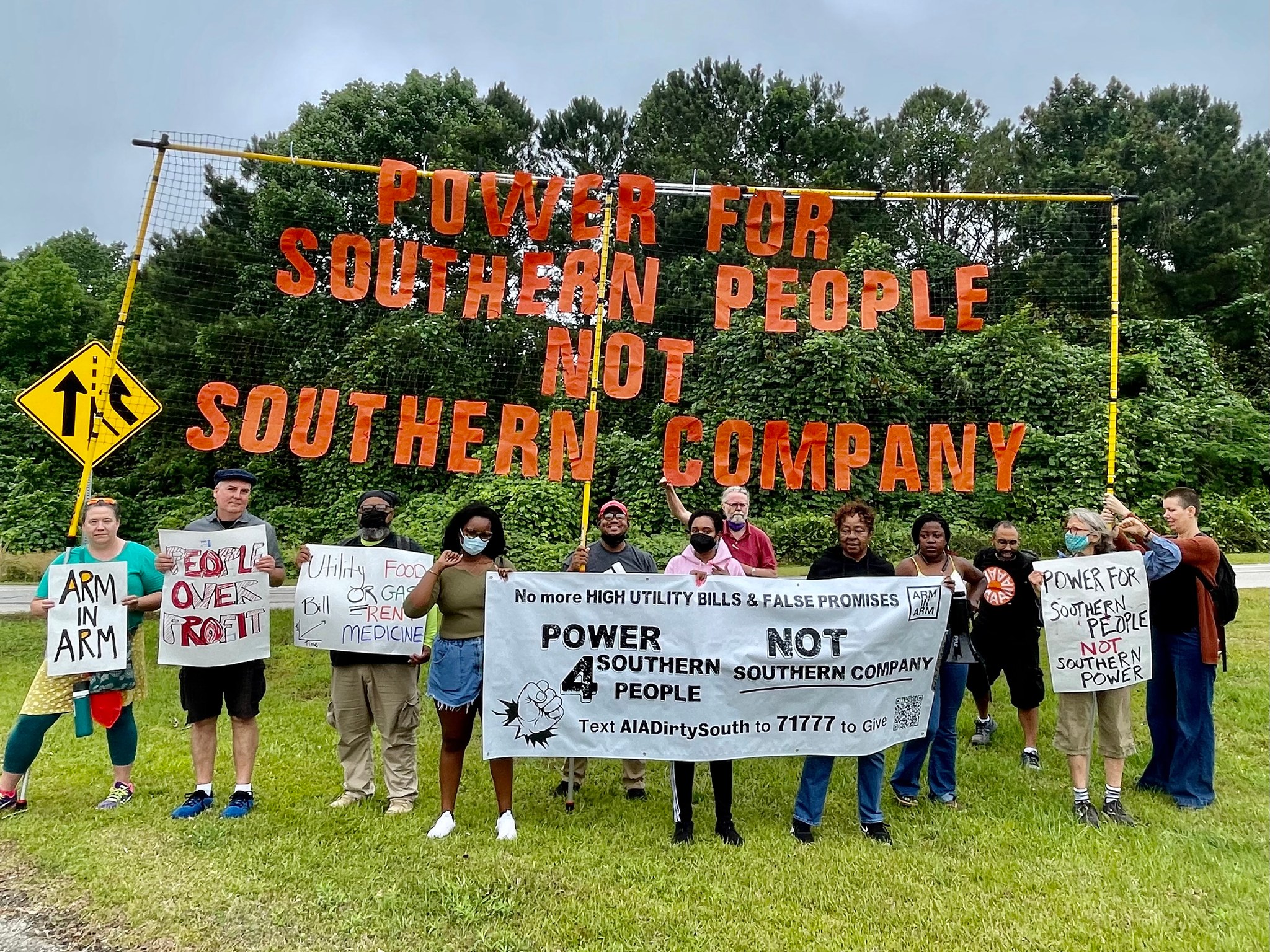 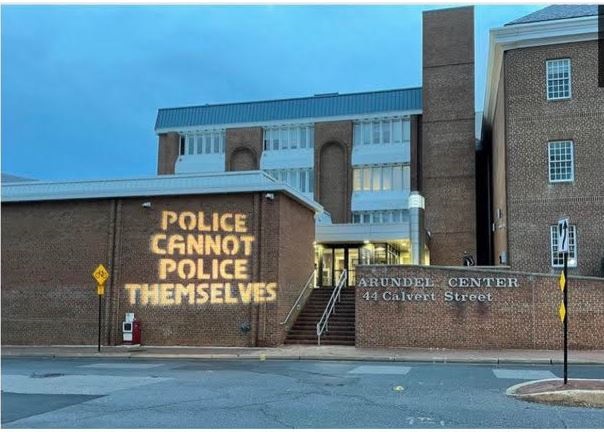 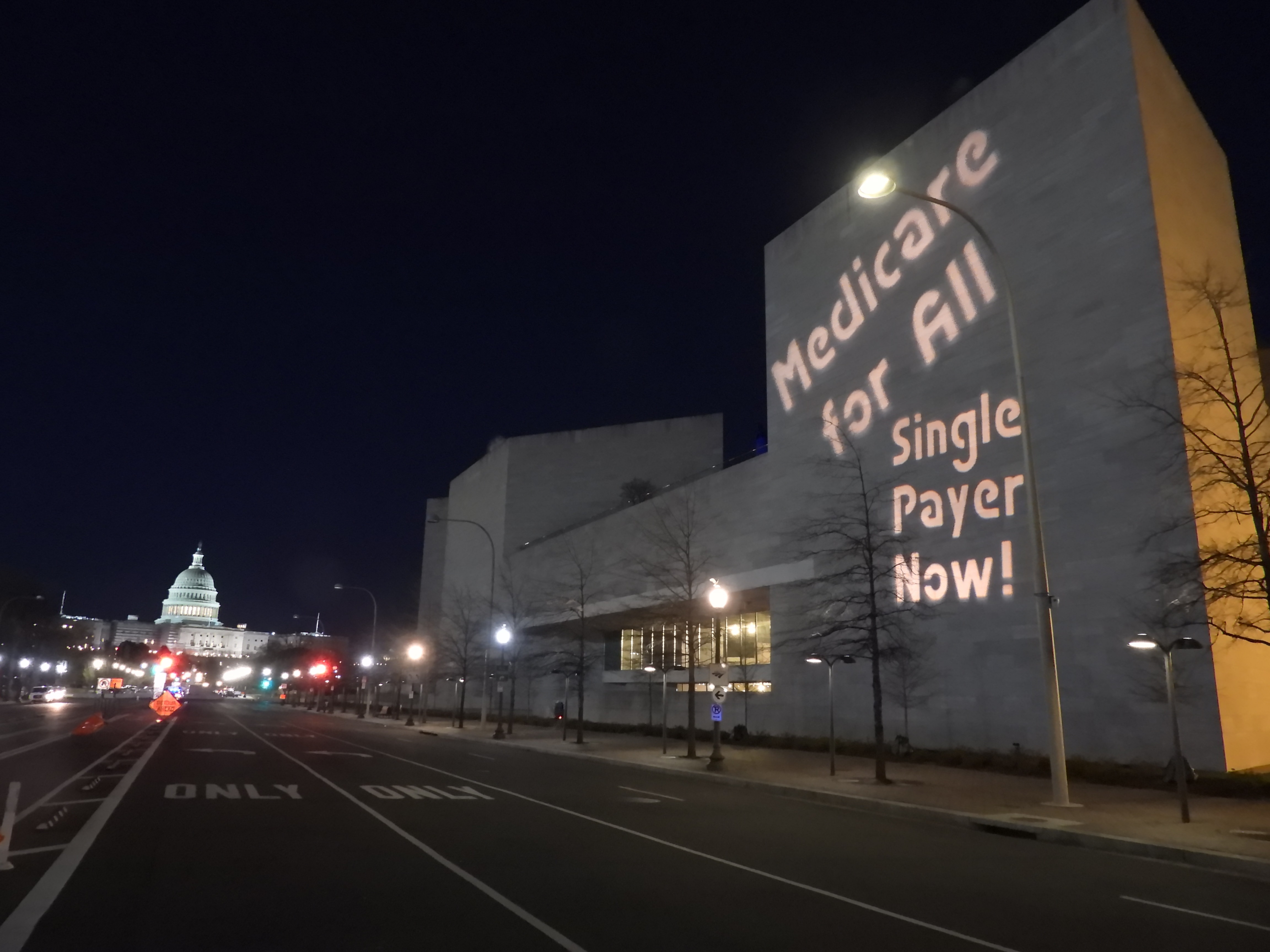 And lastly, a bit of fun during these challenging times: Ukraine Flag Projected on Russian Embassy and a Flash Mob Dance to "Stayin' Alive" in Wisconsin!

Inspired by this activism and want to keep it growing?  If you're able to, please join the Lumbar Club by signing up for a small, monthly tax deductible donation.  Info and secure sign up form HERE, or call Amy, 206-495-1969 to donate over the phone. 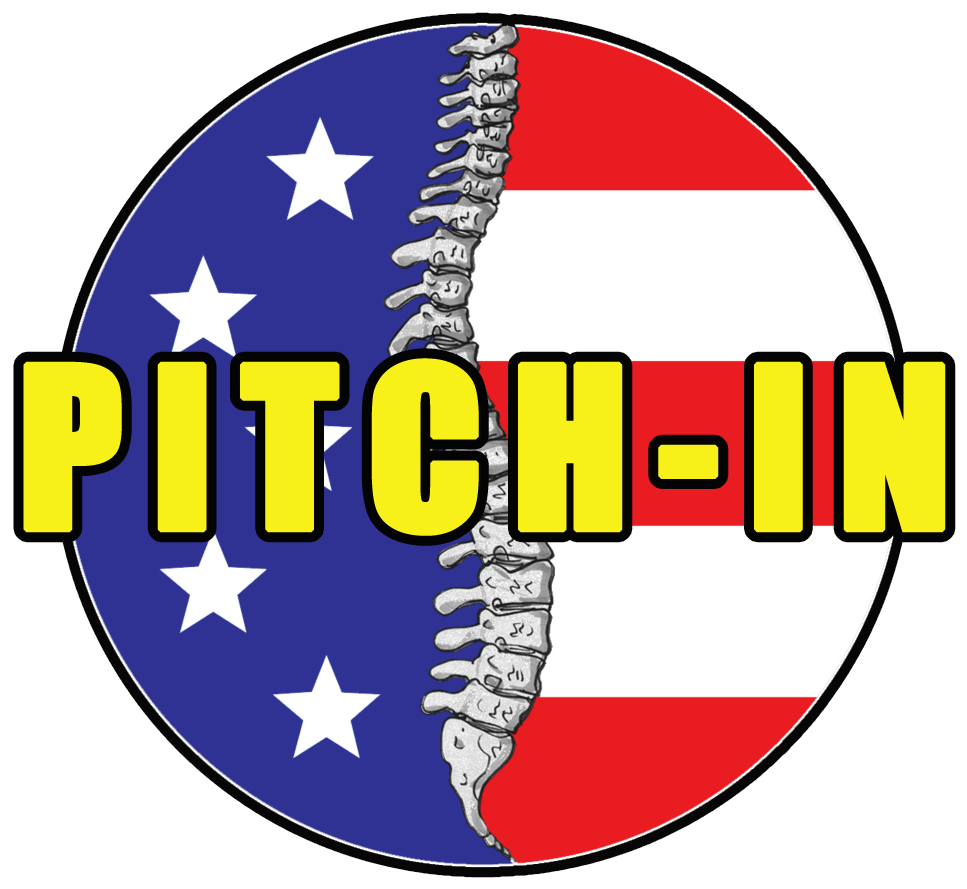 “I want freedom, the right to self-expression, everybody’s right to beautiful, radiant things.”